Every September, Phuket celebrates the ‘Por Tor festival’. The Chinese-Thai who live in Phuket set up sacrificial dining tables in their house, at markets, and in temples to pay respect to their ancestors. Besides the sacrificial offerings that you normally find in related ceremonies such as candles, incense, tea, food, desserts and fruit, during the Por Tor festival there is also red rice turtle cake as well. 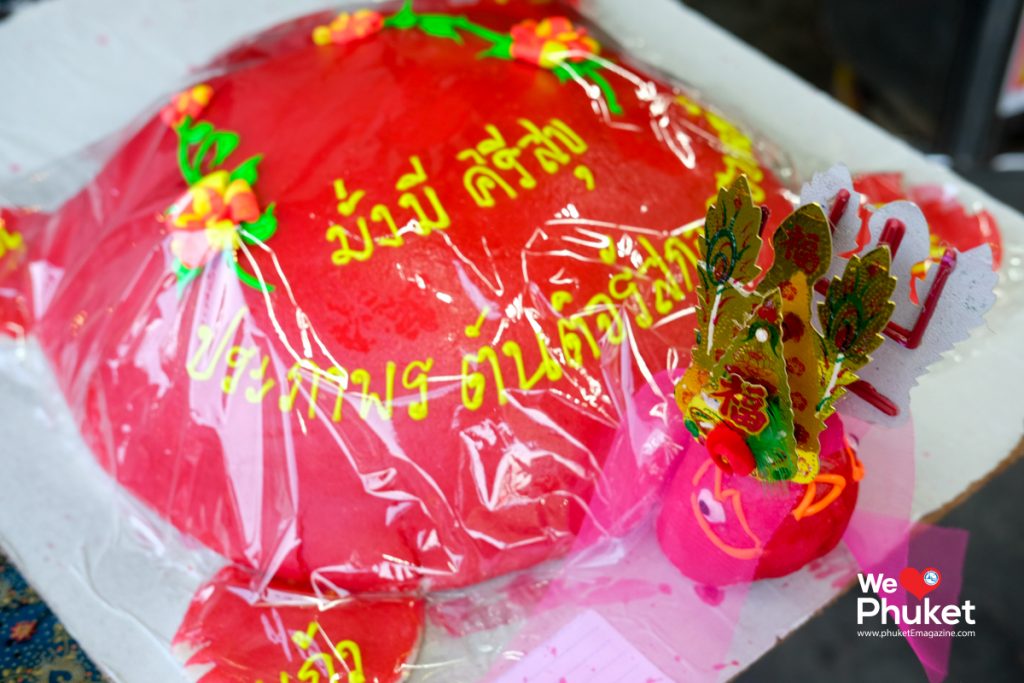 But why turtle? Because the turtle is the symbol of longevity. It is believed that if you offer a turtle to the gods, you will – like turtles – enjoy a long life. Of course the ceremony is held in many temples but the biggest one takes place at the Por Tor temple which located in Ta-Kua-Tung Road in central Phuket, it’s a small temple at the corner of the road. There are many activities at the festival such as movies, Thai and Chinese drama dance shows. You can notice how the festival is held in respect by the number of red turtle cakes placed on the many long tables. 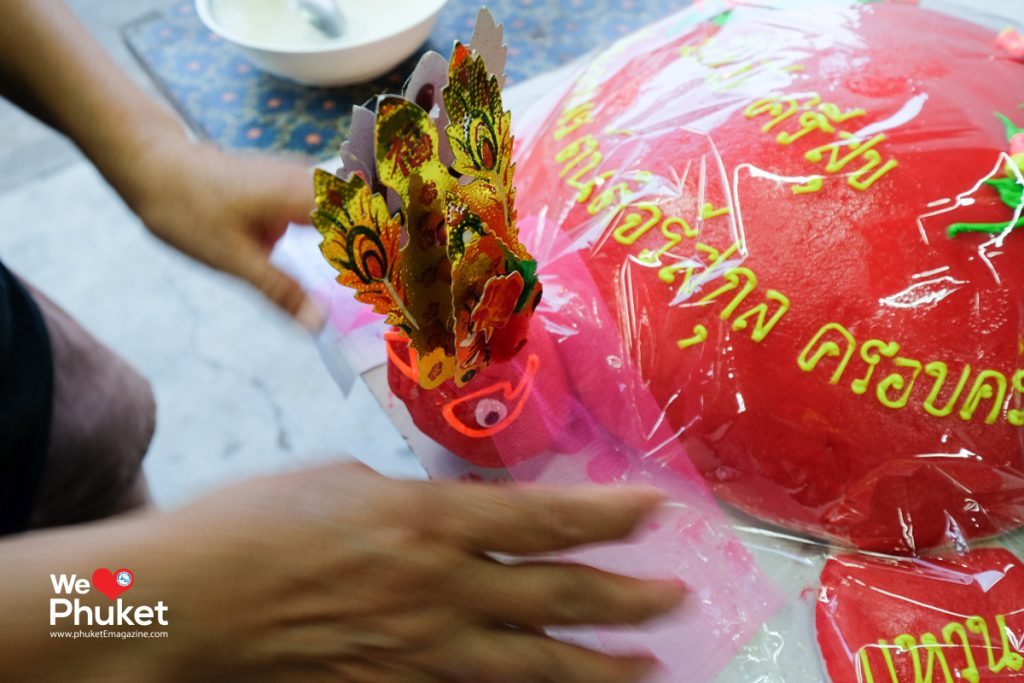 Miss Vipada Thongpinyochai aka ‘Kee’ is the owner of Keng-Tin, a local sweet shop that been open for 100 years already. The shop prepares red turtle cakes for the festival every year. She tells us that she has been attending the festival since she was very young and that many years back it was more elaborate than it is these days. All the big shops in town decorated their large red turtle cakes in style. She remembers that there used to be a company that ordered 10,000 baht worth of turtle cake! At that time 10,000 baht was certainly not considered a small amount. The company was Thaisarco, and during the ceremony people would parade the turtle around. 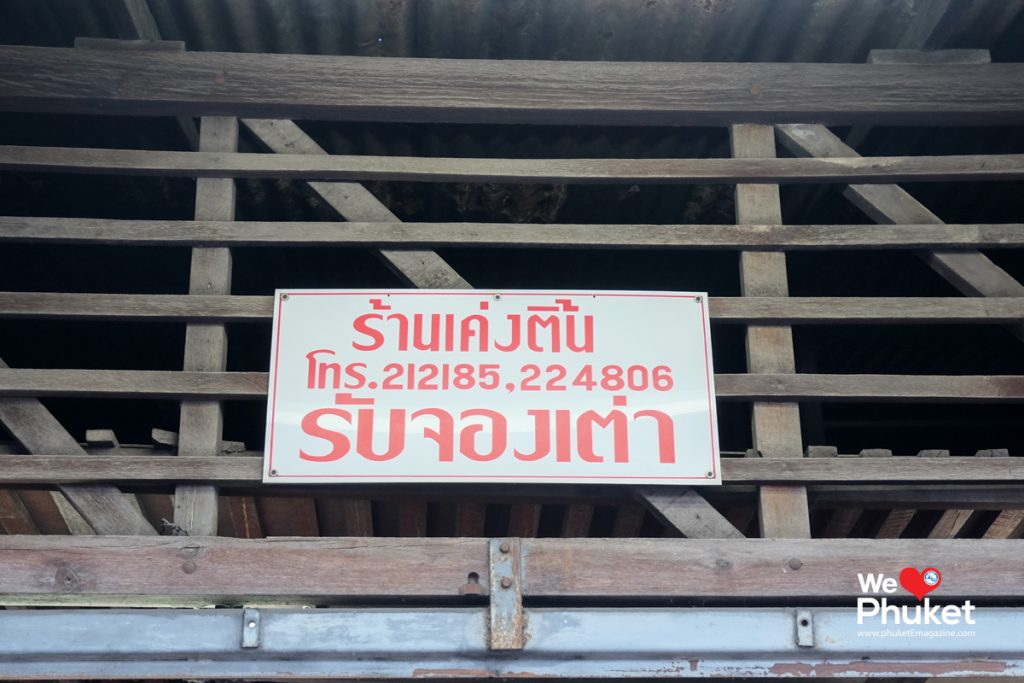 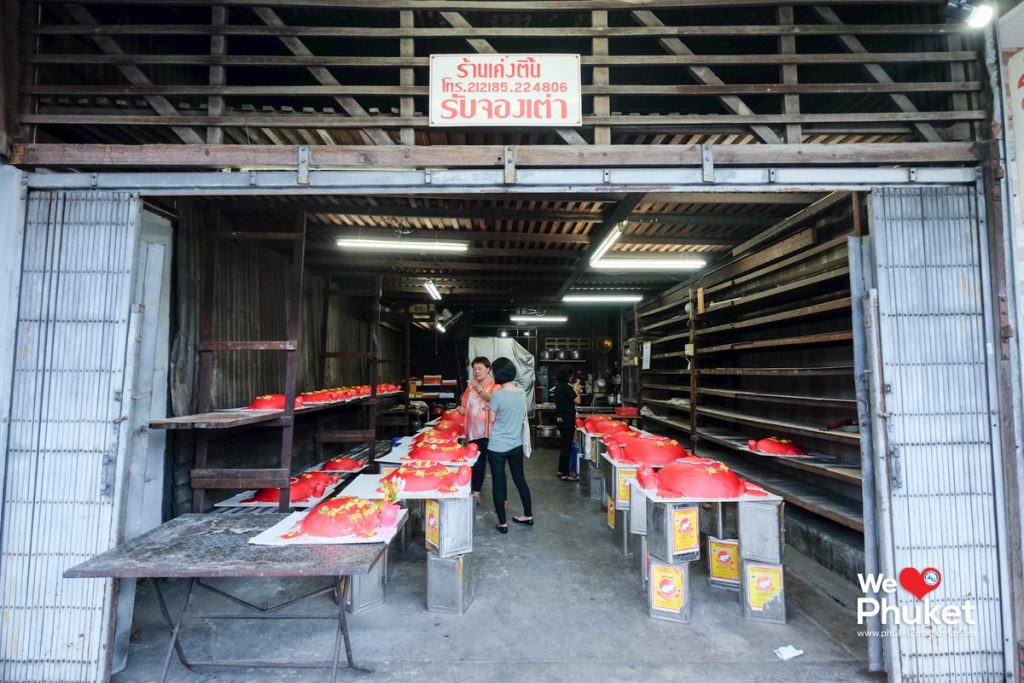 Khun Kee also explains that nowadays people still order turtle cakes but not as much as in the past. However there are still some people that believe in the festival and those who work for the Por Tor Temple. Those who have a wish or a favour for the gods to grant offer the turtle back to gods in return. The price of turtles vary from 100 baht up to 15,000 baht. 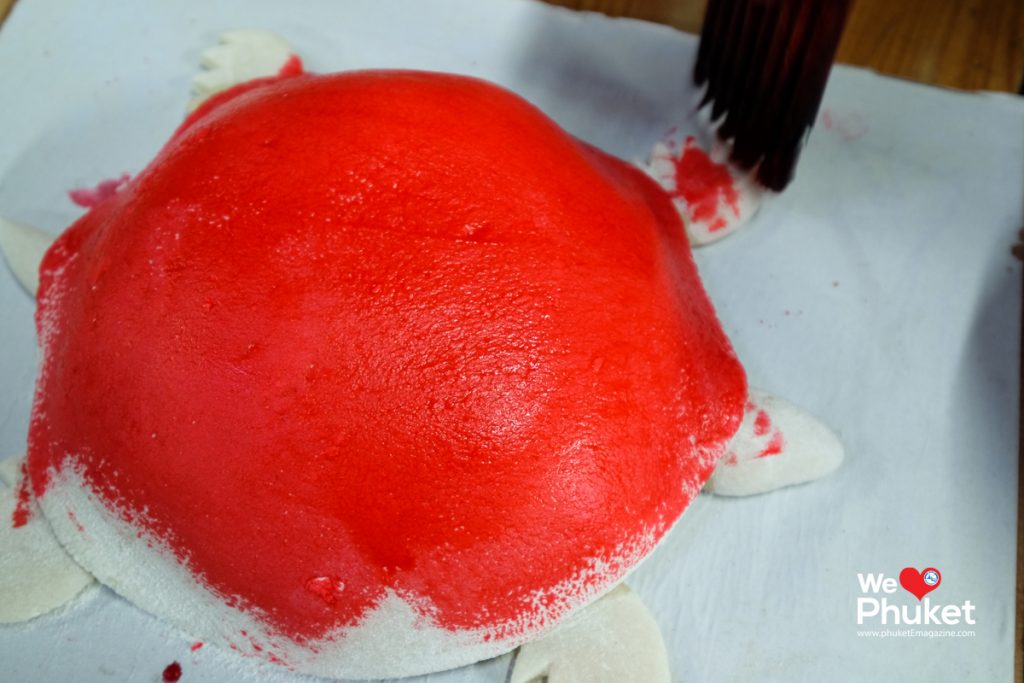 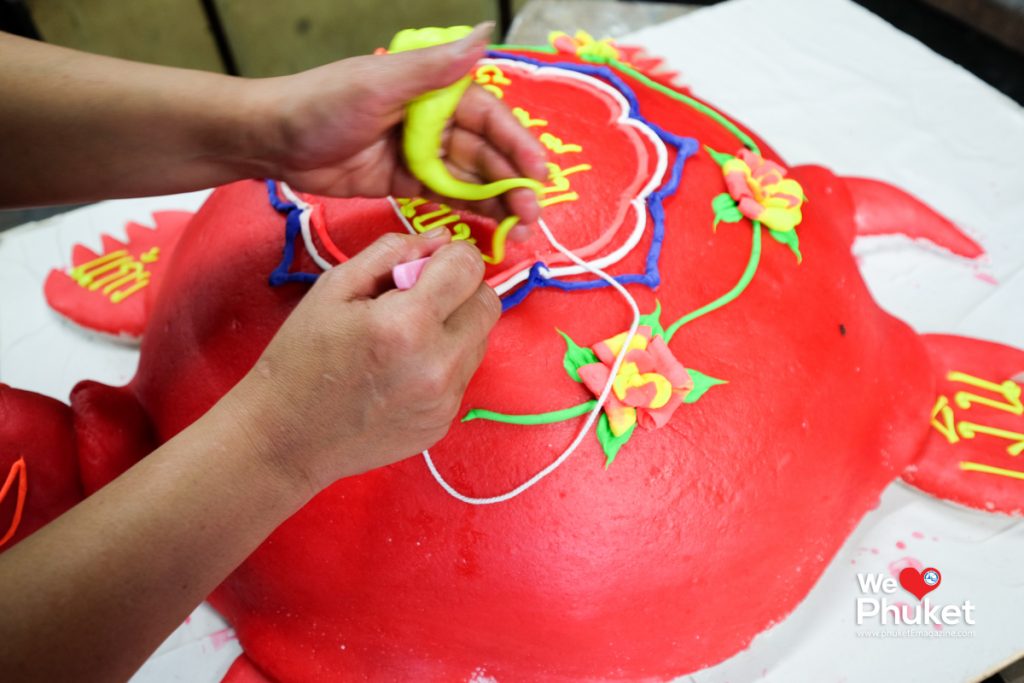 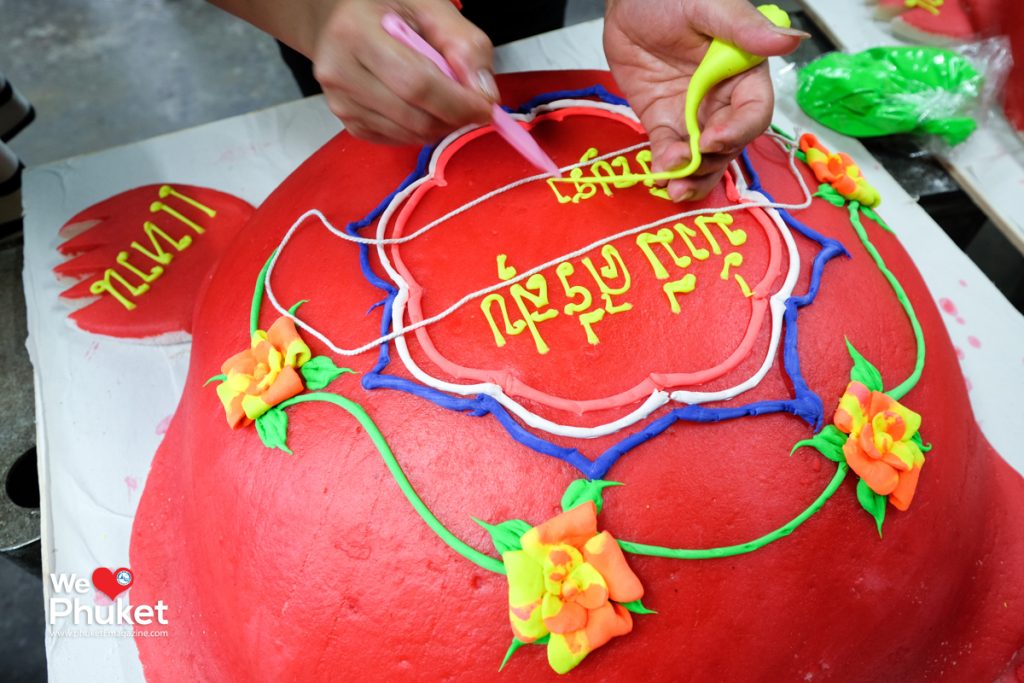 Red turtle cake is made from glutinous rice flour mixed with syrup and the mixture stands for 5-7 days until the flour is sticky enough. Once the flour is set it is put into a wooden turtle-shaped mold and legs and a tail are added then it is painted with red food colouring. The turtle’s ‘shell’ is decorated with wishes, the name of the family or company and blessing quotations such as ‘healthy’, ‘happy’, ‘wealthy’. The wording is also made from sticky flour mixed with food colouring. Before the customers come to pick up their red turtle cake, the shop decorates them with pink ribbons. The customer will later bring the turtle to pay respect at the temple and when the ceremony is over, some family take their turtle back home, while some donate the cakes to the temple. The temple will later fry them and distribute them to the needy. 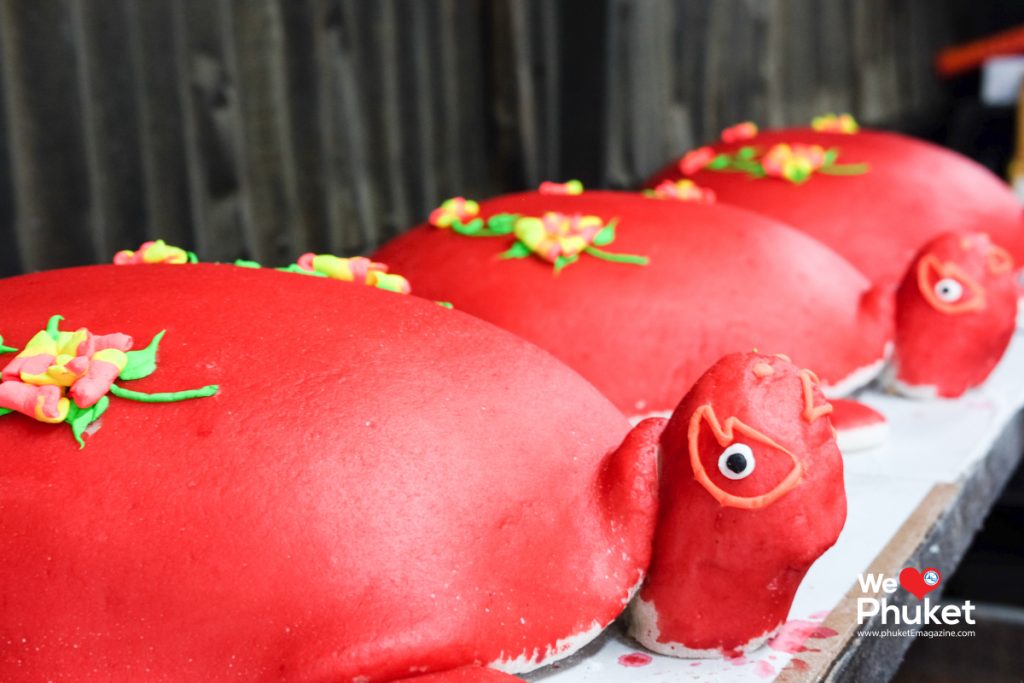 Khun Kee remarks,“Our shop retains the traditional ways of preparing red turtle cakes, using original ingredients such as genuine flour because using the turtle mold is a delicate process and other flour may not dry out in time. The shop uses 1000kg each festival! The wooden mold boards take a month to prepare. The shop needs to be well prepared each year to be ready for the customers’ demands. These days you can see some families paying respect with jelly turtles and baked flour cake turtles but it’s my wish to remain as traditional as possible.

“Red turtle cakes and the Por Tor Festival are unique to Phuket and paying respect to the gods along with certain traditions sometimes have been forgotten in this generation. I wish to help retain this culture and I’m happy to see that an artist has painted a large red turtle on a wall downtown. I wish to see more of this generation learn and study the beauty of Phuket’s culture.” said Khun Kee. 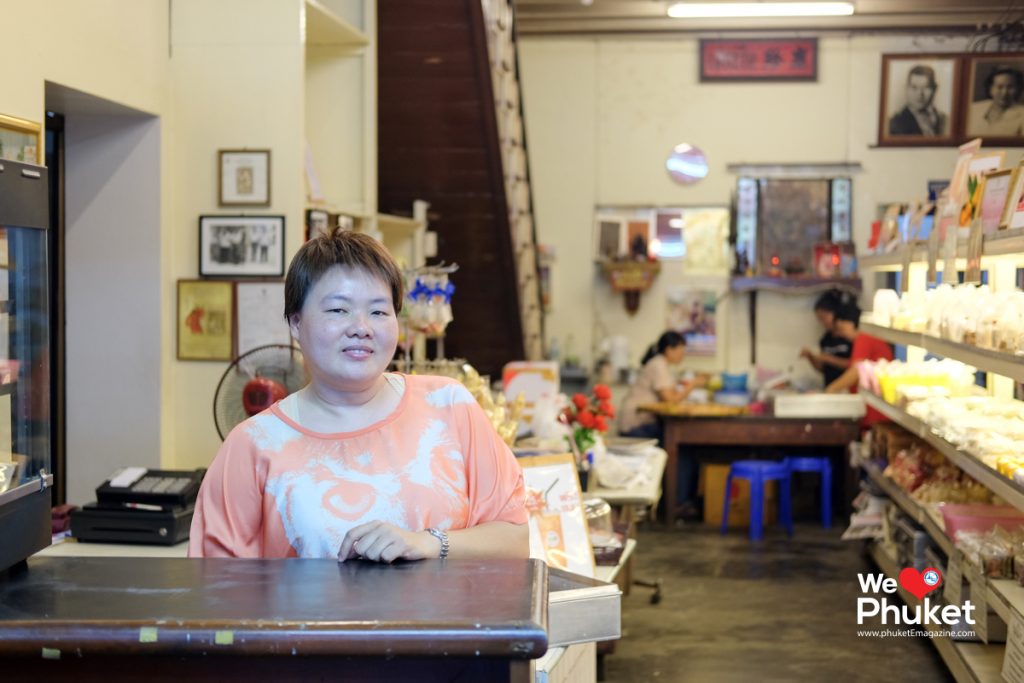