Parallel Universes, Hannibal, Paulao Jellyfish – it seems that these drinks have nothing to do with each other but they do… at Z1MPLEX Mixology Laboratory. There, you can enjoy these colourful drinks in creations dreamed up by mixologists, Tom, Nan and Chat. 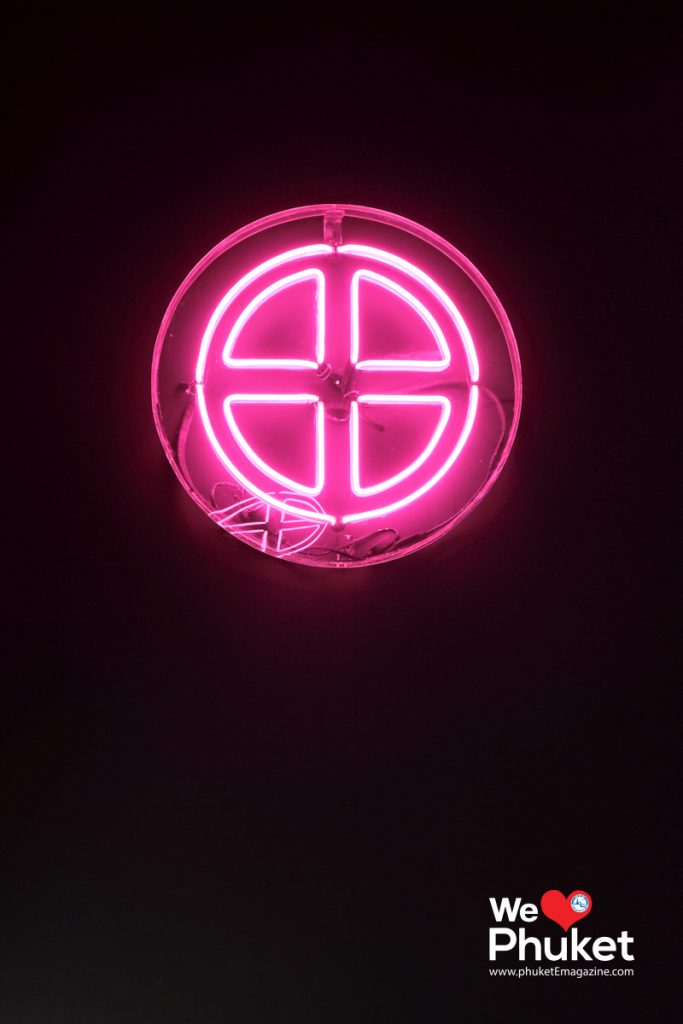 Curious, we went to Z1MPLEX to meet Khun Tom, the owner and creator of the shop and the small glass that’s so full of imagination. He explains, “I’m from Phuket, I studied advertising and had my first job as a copywriter for about 10 years at Ogilvy and Young & Rubicam. During that time I was also a part-time DJ in nightclubs. In my mind the greatest achievement was to win a copywriting ‘Cannes Lines Award’ and I did it! I won the award and felt like I’d won a gold medal at the Olympics! Still, I was in the creative, marketing business because it was fun but at some point I realized I wasn’t really enjoying it anymore so I quit the job and moved back to Phuket six years ago. I was sure that as I had won the award, I could open a small advertising agency in Phuket.” 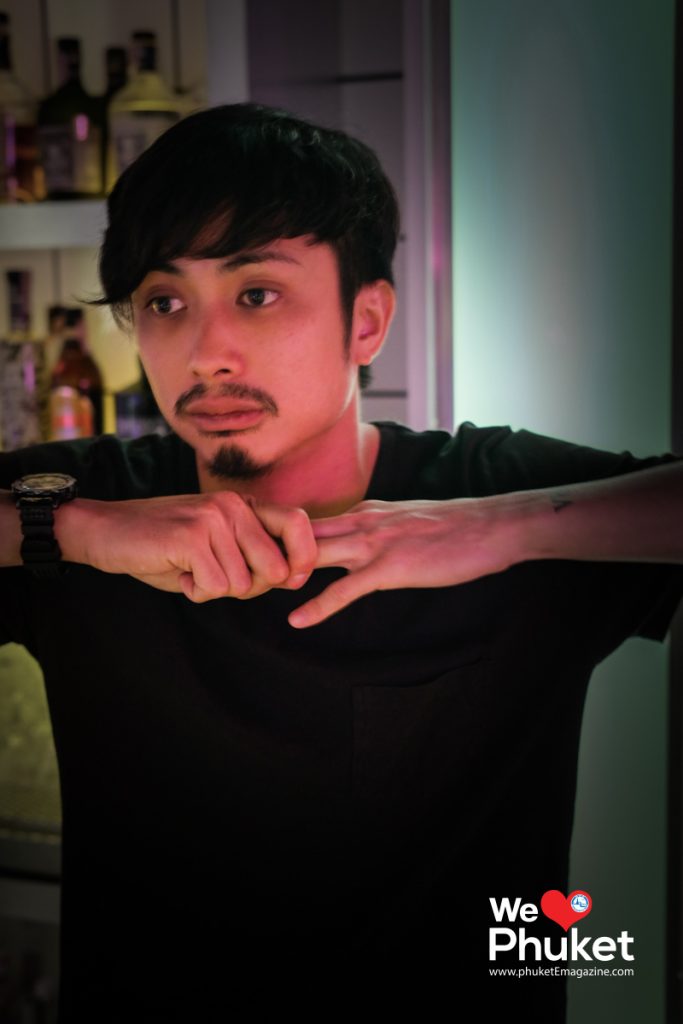 But when he came back home, things didn’t turn out the way he expected, so he opened a boutique under the name Z1MPLEX.  “The name started with my clothes shop. I noticed that we rarely got customers until we had some music on the turn-tables and I started to have more friends in Phuket who were DJs. We held parties at weekends and I made some posters to promote my shop and changed the concept and themes every week. I did that for three years until one day I heard about a place in Patong that was looking for a graphic designer. I submitted my profile and got accepted as a part-time DJ in a hotel, so, Z1MPLEX had to be shut down.” 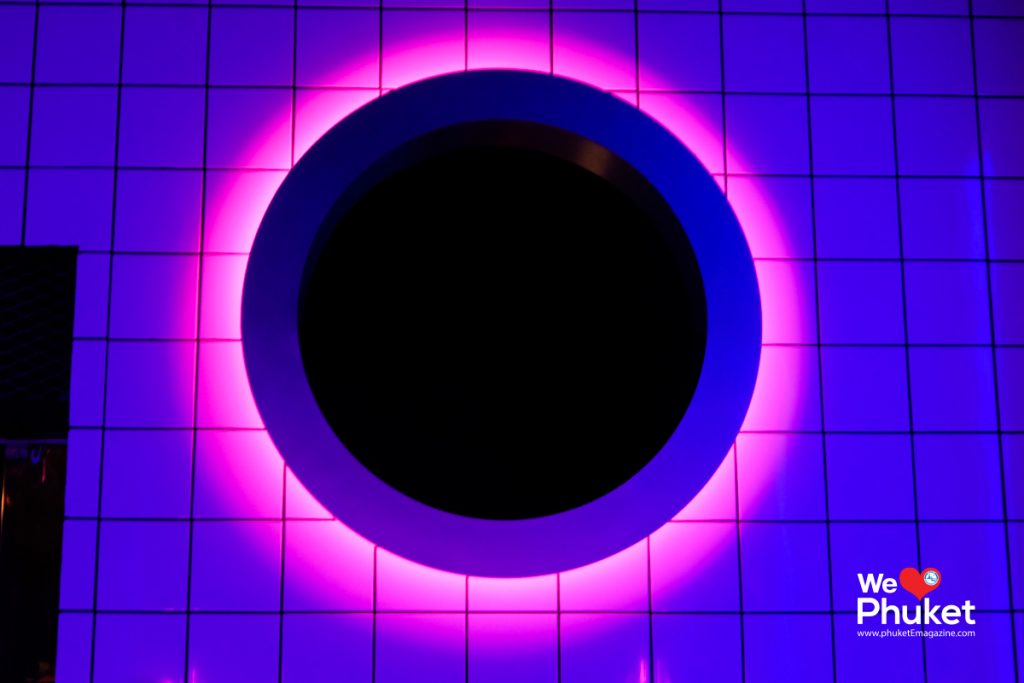 “After moving to Patong, I realized something was missing from my life, the music that I loved, the people who I loved. So, I started looking for a new opportunity and I found this building and created my own brand. I used my savings to renovate the building. For the first few years the shop went well but most of my customers didn’t spend much money there. They were just looking for a place to hang out but I still had to pay rent and overheads. So, I came up with the cocktails idea. Still if I’d have just stuck to mojitos it would have been too simple. I’m a creative type and my ideas are different. I wanted to create my new own drink, totally different from others. One day I saw a glass that looked like a skull. My friend, Nan said, ‘Could you make a drink that looks like a brain in this glass?’ I thought, ‘are you kidding me?’ Then, I started to try different combinations until we got our first drink called ‘Hannibal’. I named the drink after Hannibal Lector in The Silence of the Lambs – the psychopathic genius who loves to eat humans’ brains. As I used to be a copywriter, I know how to name my products.

During the process of making the Hannibal l had tried different combinations more than 20 times and there was one that turned out like a jellyfish so I changed the type of glass to suit it and customers kept coming back for more. My friends liked it and put it on social media until one day a customer asked if I had any more special drinks. I started to create new drinks right away and gave amusing names to them and customers bought them all. One day, another customer came and asked me, ‘Tom you play with density, right?’ and then I realized that that’s what it was – people liked the texture. So I dived deep down into mixology. I took about three more months mixing and renovating to get more customer awareness.” 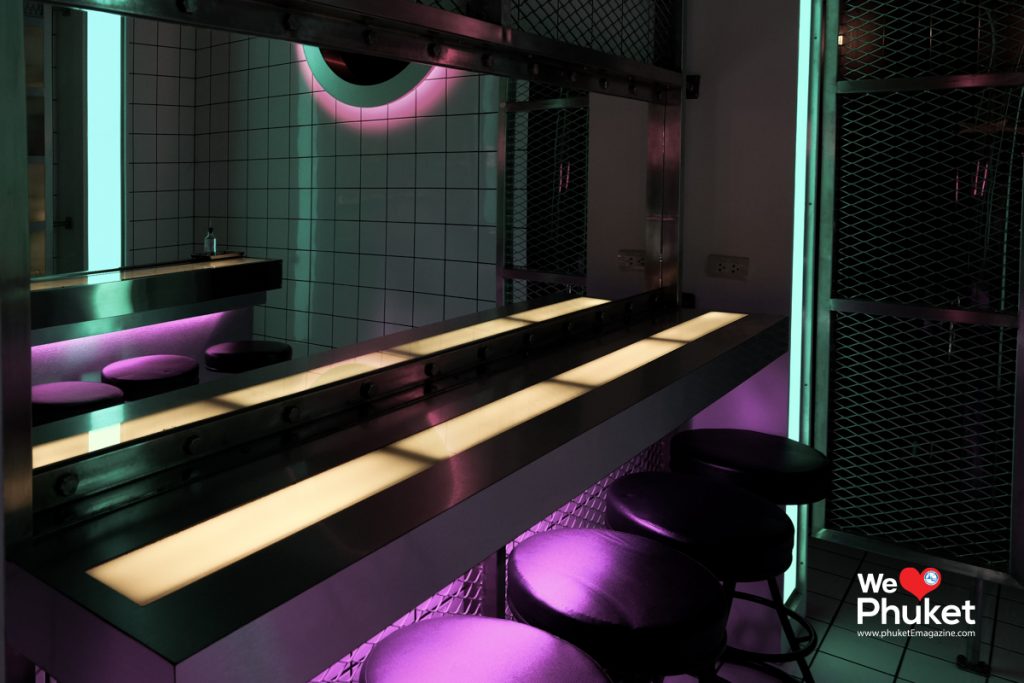 “One day a customer suggested I join in the ‘Bols Around the World’, an online world bartenders championship. Each week we had one question or problem and it took about 12 weeks to complete the tests. I applied, along with about 20 Thai people and approximately 6,000 people from all over the world. But I was without any experience in bartending and was competing with professional bartenders. I might not have had the basic skills of a bartender but I knew how to layer the liquors and control the density of the drinks. And I came second in the Thai part of the competition and 200th worldwide.” 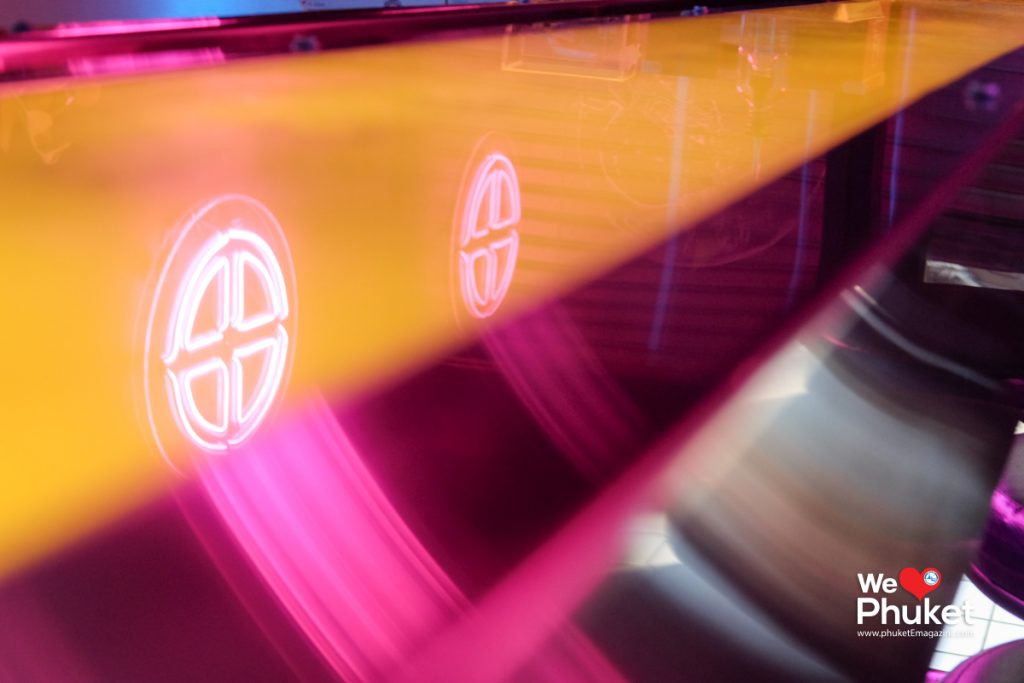 In the first year of Z1MPLEX it seemed that Khun Tom was trying to make the impossible possible by experimenting in his laboratory; science mixed with art “I can claim that the products you see at my shop are nowhere else in Phuket or Thailand. At the shop we have about 20 drinks on the menu and in my mind about 300 more. The first obstacles might look high and tough but if you know the way to get around them it’s easier for the next ones. 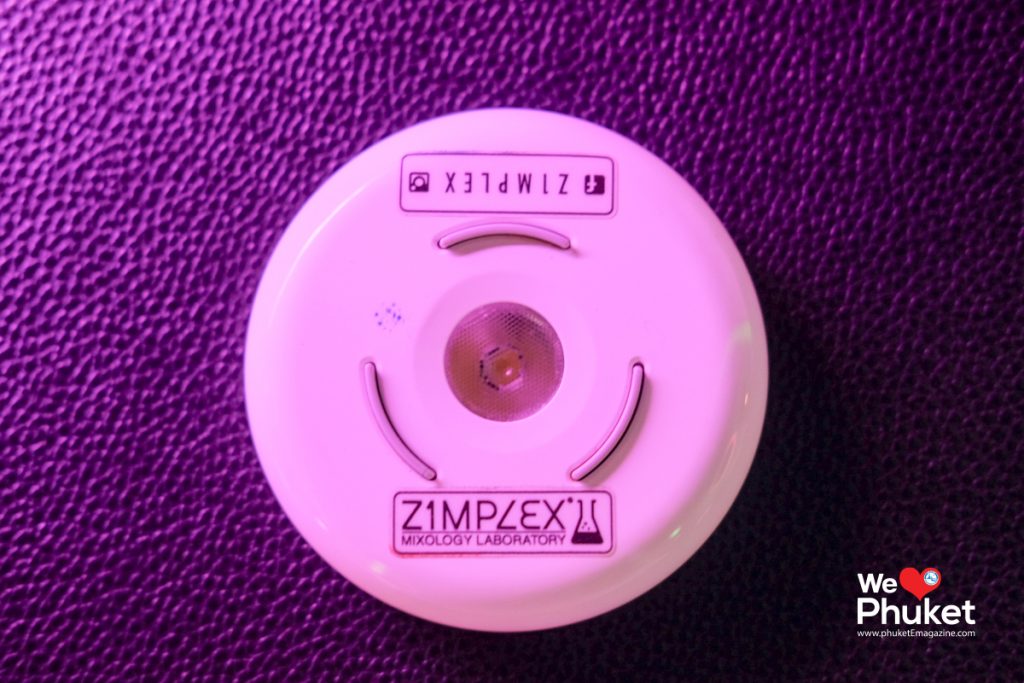 Nowadays Z1MPLEX Mixology Laboratory is a new attraction in Phuket and one of the island’s must-visit landmarks. People know the shop from social media. Khun Tom told us that he didn’t pay a single baht for social media and advertising. “The more people come and visit my shop the more famous it gets as I already get marketing from them as people come and take colourful photos of the drinks and share them so the public gets to know us more. I believe that if you really put passion and creativity into the things you make, people will come to you.”

But what is the future of Z1MPLEX? Khun Tom answers “I want Z1MPLEX to run on its own so I can move on and do other things. There are so many things I want to learn and do. I might come up with a Z1MPLEX start kit for people to buy and make the jellyfish on their own at home. I want Phuket to be famous all around the world. I want people come to Phuket and enjoy different activities. I believe we can do anything. 70% of my customers are from Bangkok so I take this opportunity to make Phuket better known. I know that Phuket can be different and if you are different and unique, people will come looking for you.” 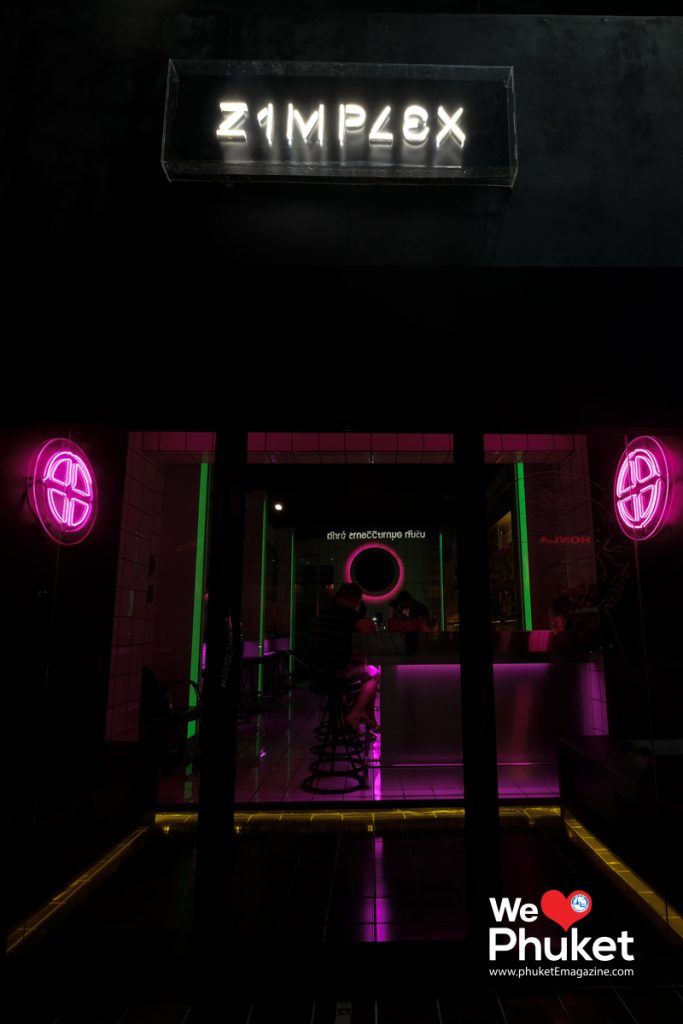 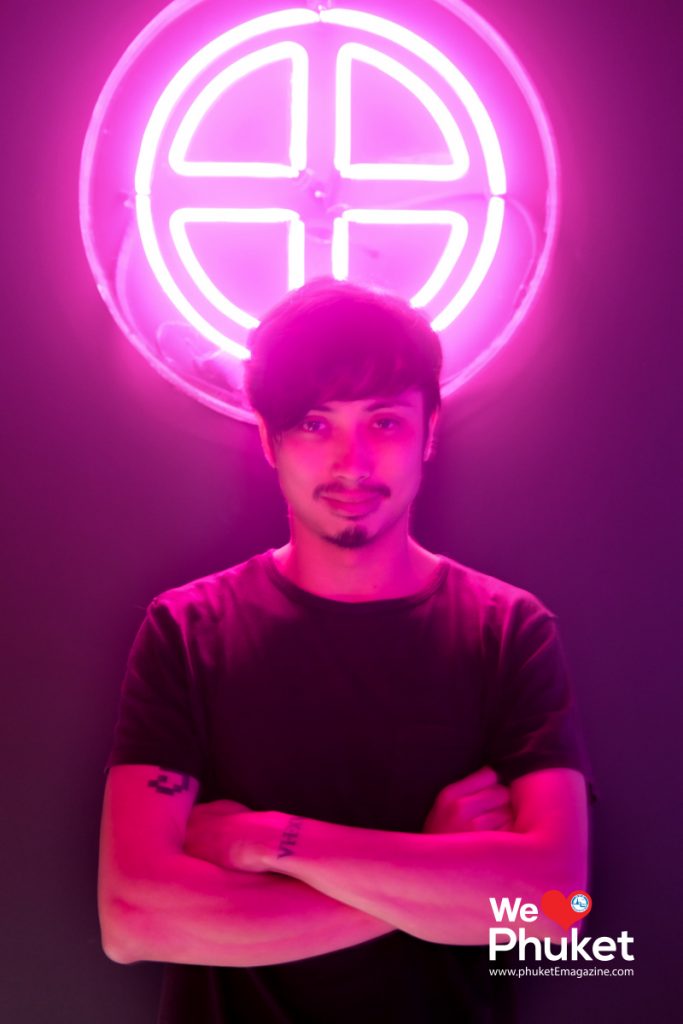