Phuket’s nine-day Vegetarian Festival is about to start and lasts from 29th September – 7th October. The traditional yellow flags will flap everywhere in Phuket Town. Shrines are preparing the sacred rituals of the festival which has been celebrated for as long as people can remember. So much so that the event was announced a Thai heritage feature by the department of cultural promotion. If you plan to travel in Phuket during this festival, in addition to eating vegetables and observing religious precepts, there are many activities in which you can participate. You can pay respect to the Chinese gods at every shrine in Phuket and join the sacred rituals to experience the culture, especially the street processions ritual. This ritual is held in honour of Jiu Huang Dadi, the Nine-Emperor God, and other Chinese gods. 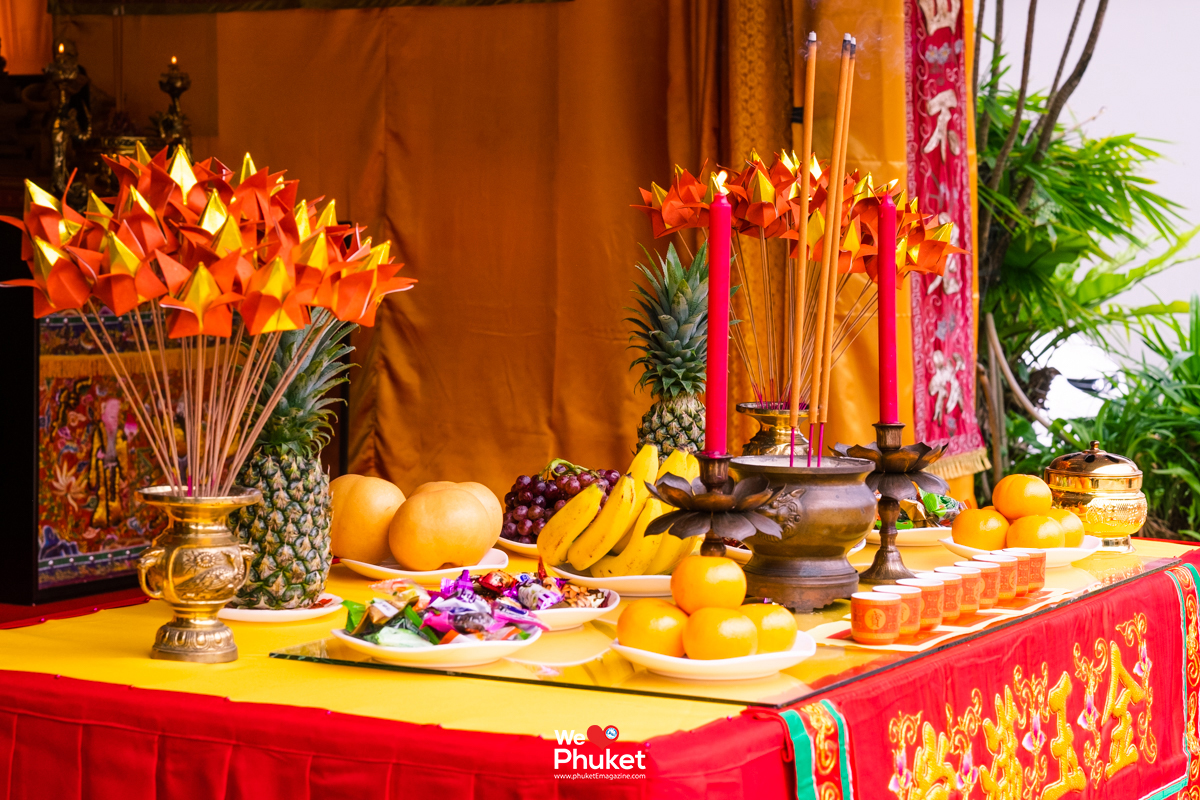 Devotees who have houses along the routes of the procession set up altars in front of their homes for welcoming the gods. Each shrine has a procession schedule of their own and the main routes will pass through downtown Phuket. 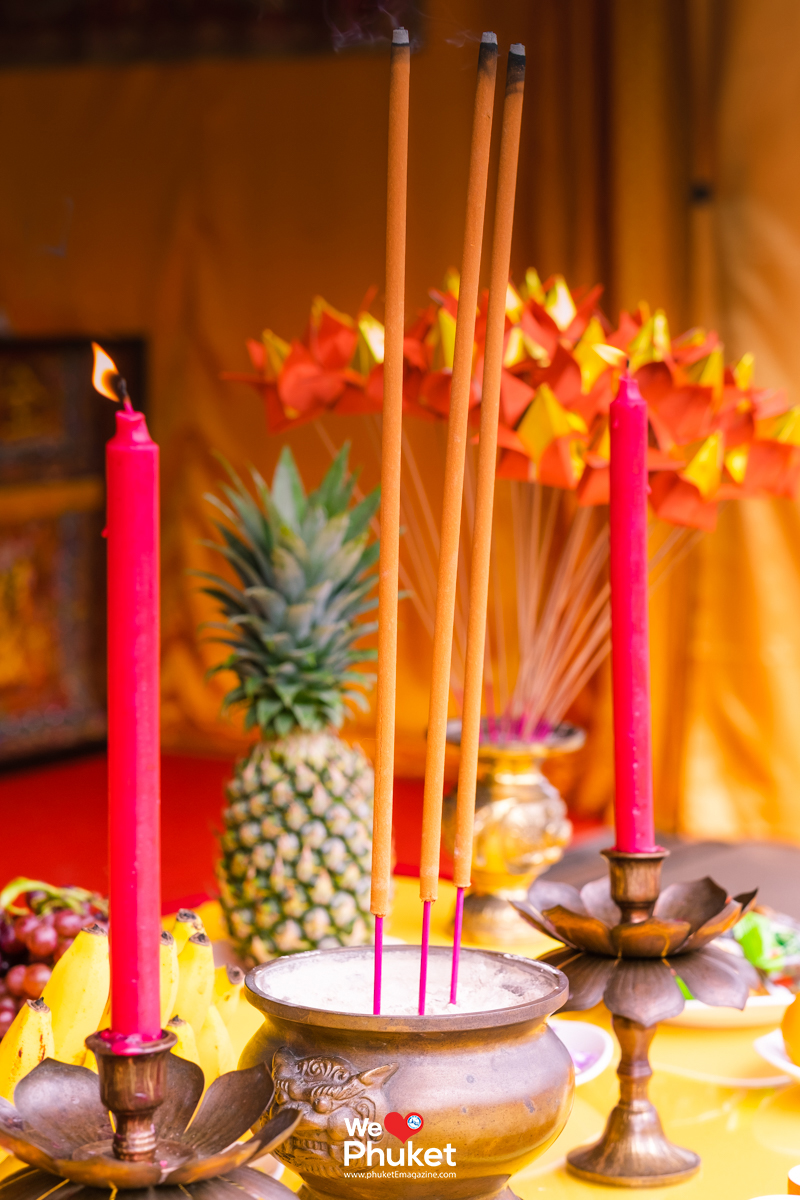 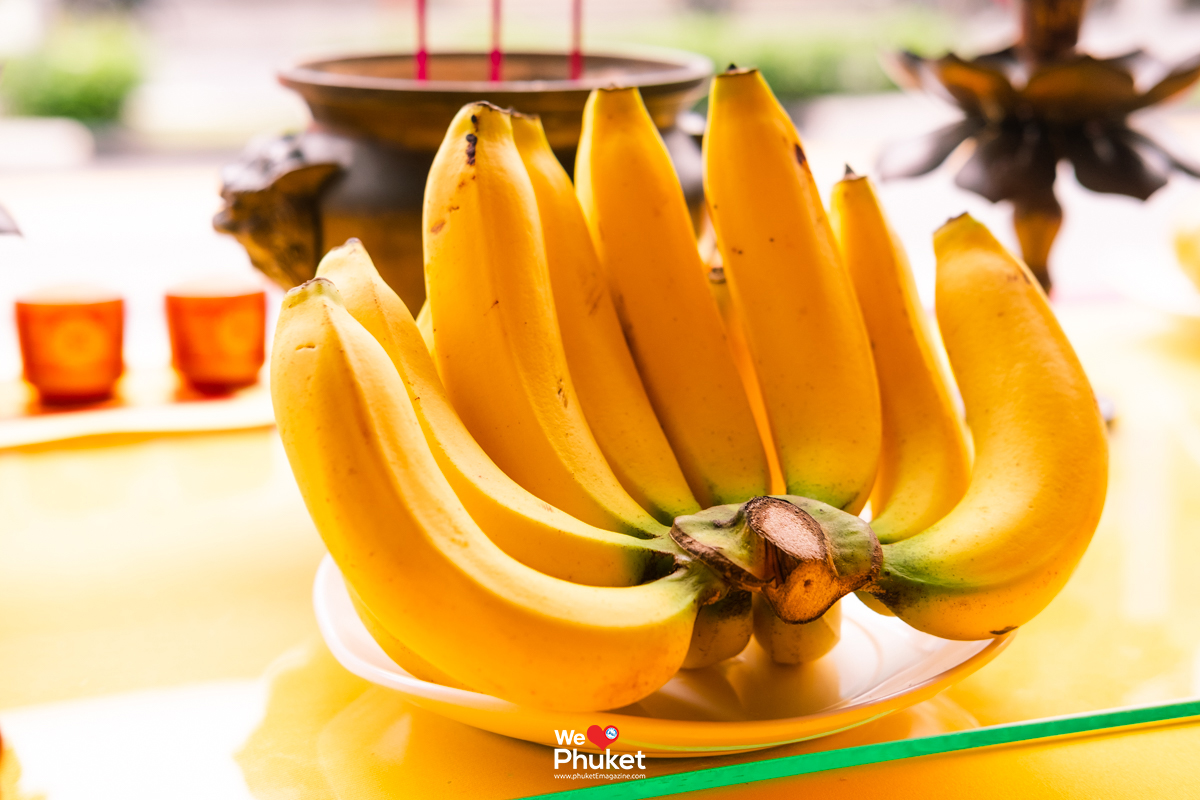 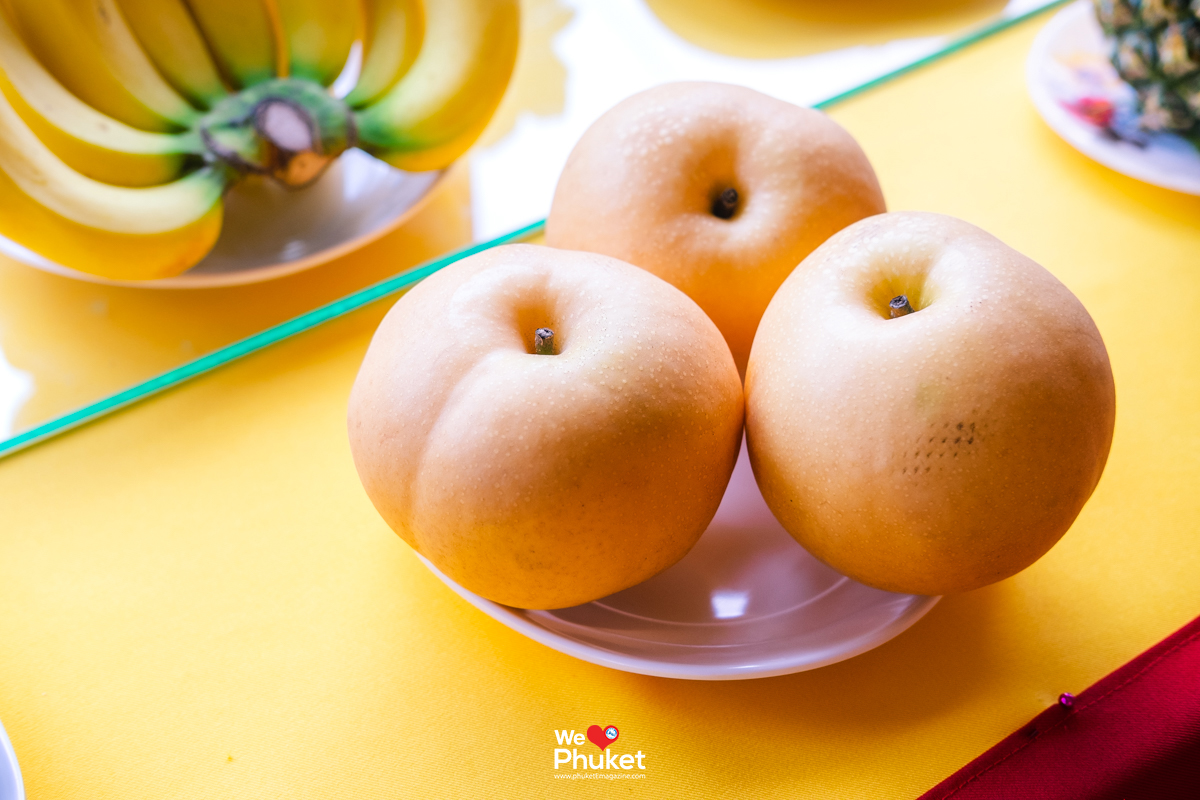 To prepare the altar, devotees set up a square table and cover the legs with gold paper and the tabletop with red cloth while the front of the table is adorned with Chinese fabric called ‘toh ui’. In the middle of the table stands an incense burner with a candlestick and a red candle on each side. Nine Chinese teacups and sacrificial offerings such as candies or plums, oranges, bananas, or pineapples are added. These fruits are chosen because, in the Chinese language, they have the same meaning as the word that represents positive things such as good luck and wealth. To complete the altar, flowers are prepared, such as fall mums, white lotuses or artificial flowers, along with the incense burner with frankincense, gold paper, and firecrackers. 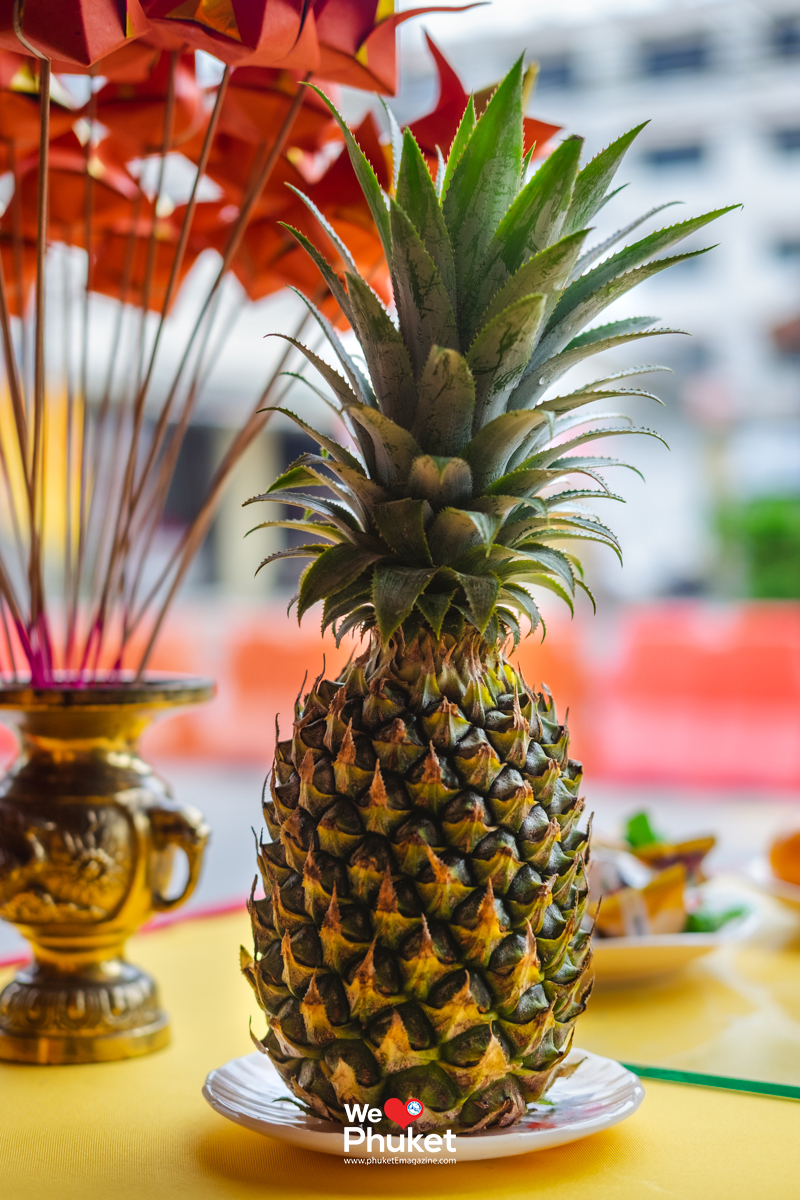 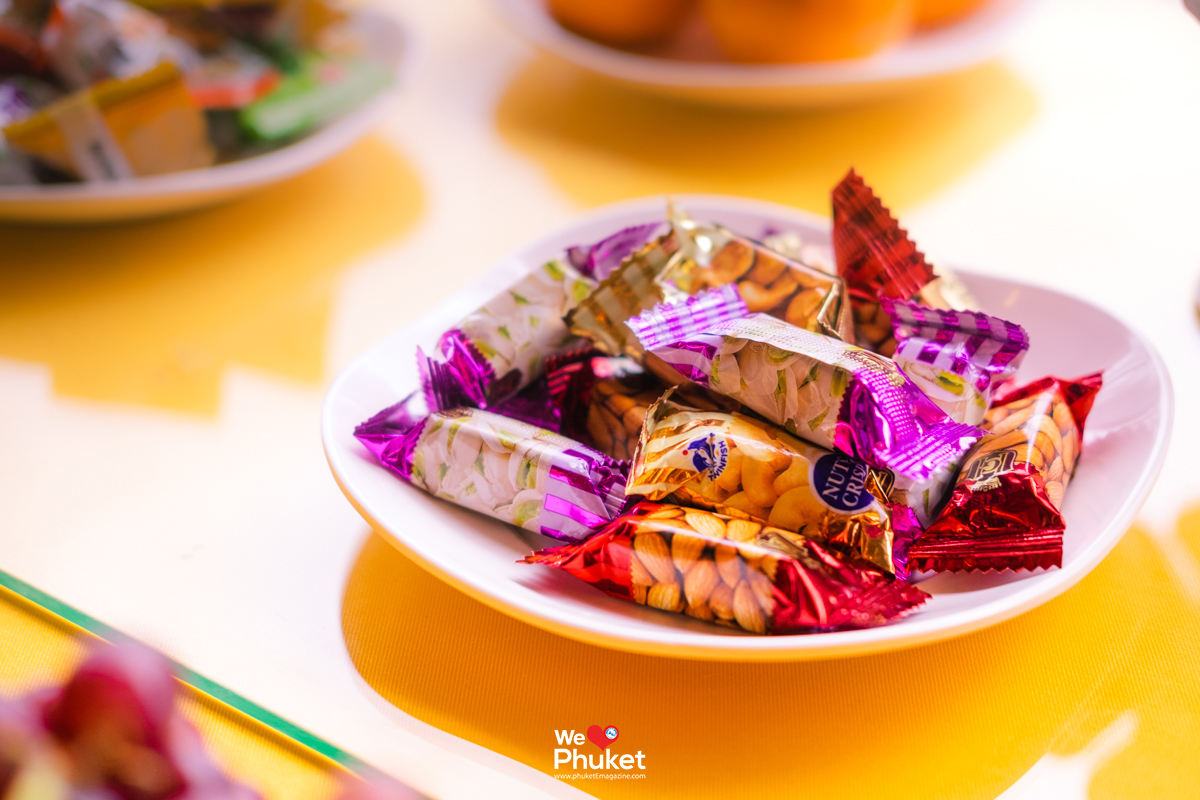 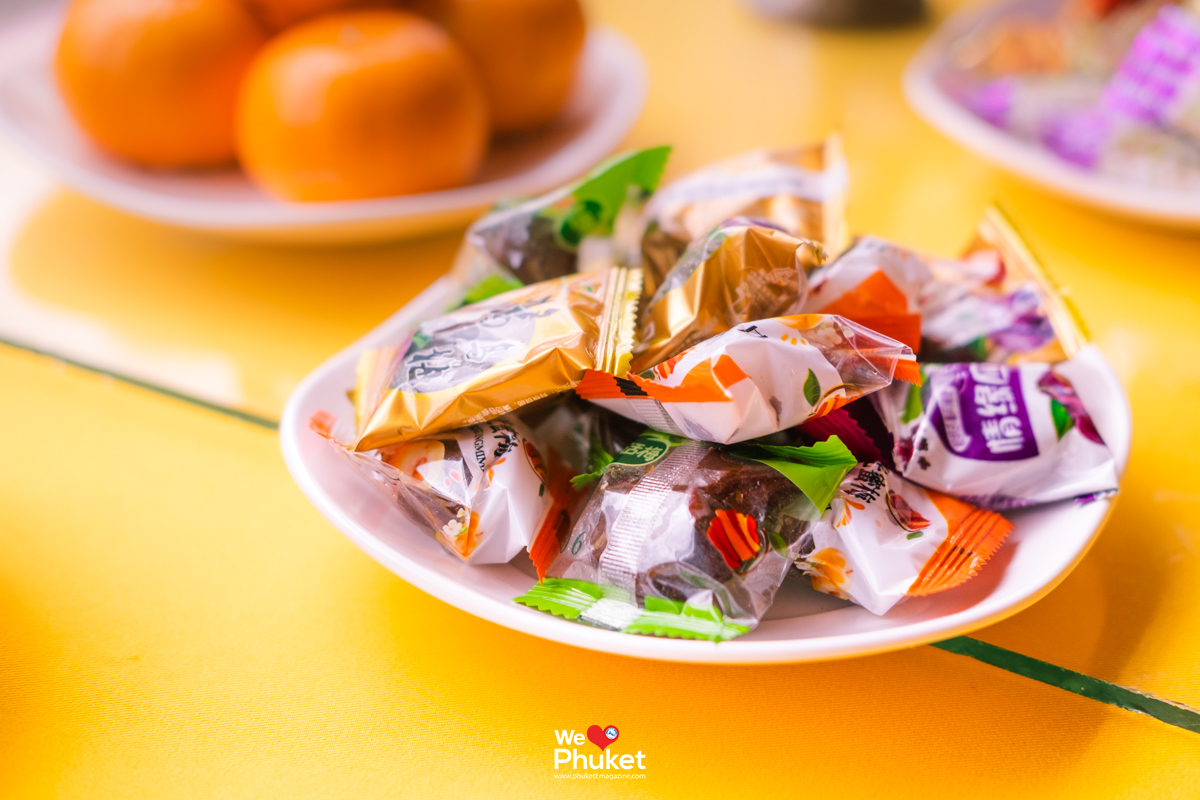 When the procession arrives, the devotees light the incense sticks and the spirit mediums will visit each house to receive some tea and fruit. If there are children and elders, the spirit mediums usually bless them. Moreover, the mediums distribute the sacrificial fruits and candy to people for eating. If you receive sacrificial offerings it is a good thing because they are very auspicious. In addition for the procession of Jiu Huang Dadi, the Nine-Emperor God everyone should sit down out of respect and refrain from lighting firecrackers. After all the processions pass, devotees burn the gold paper for completing the ritual procedure. 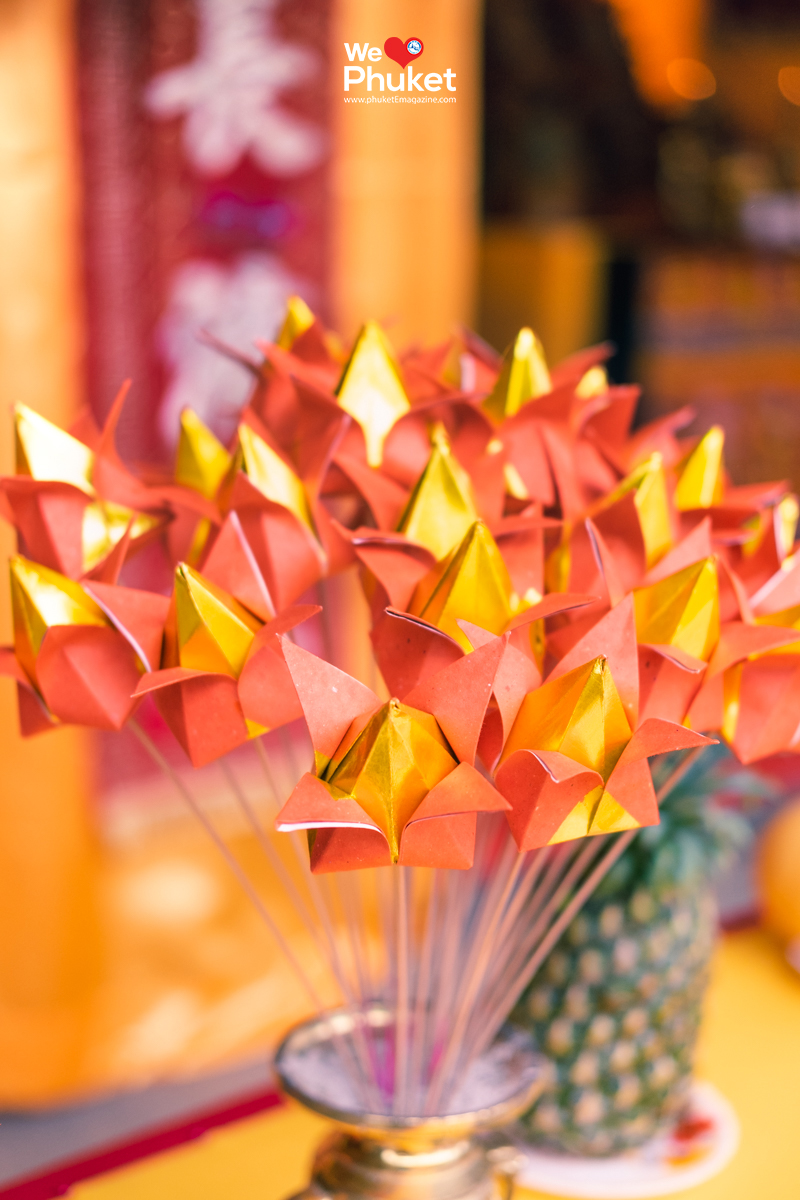 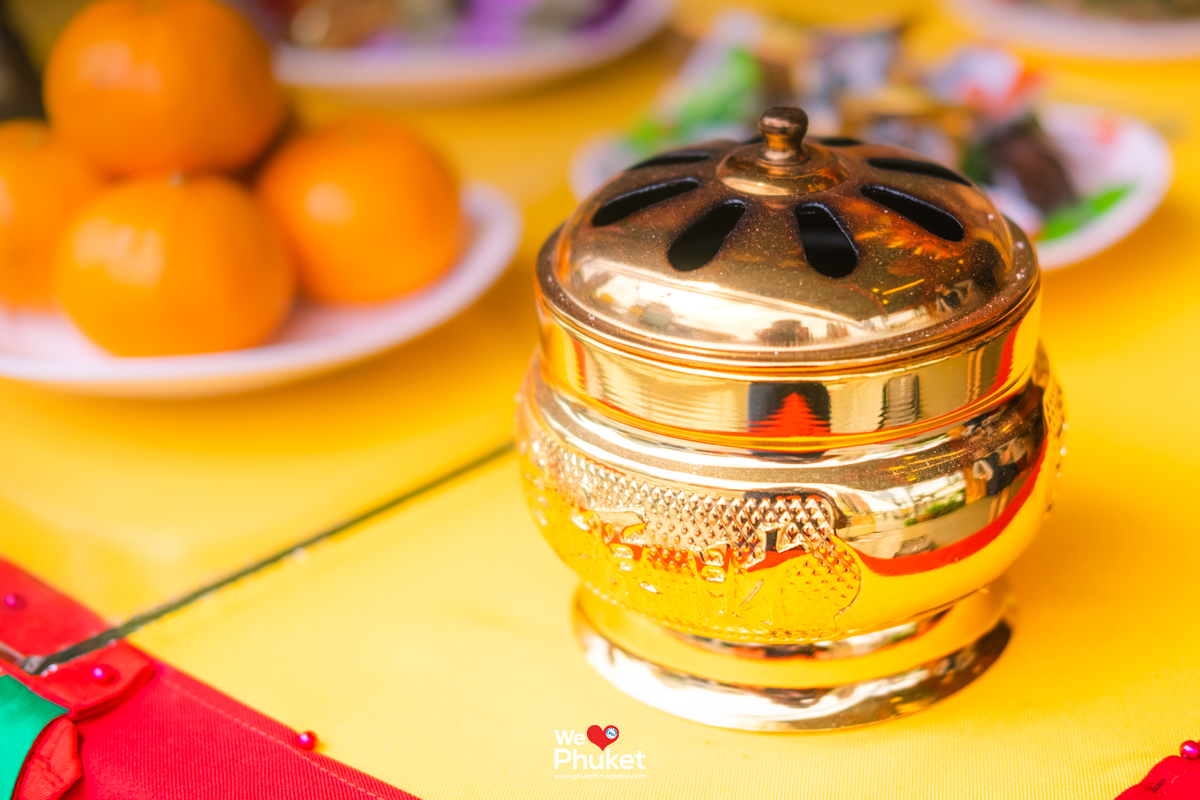 Every step of preparing the altar strictly follows the rules of the festival. By following thees rules every year, this festival passes valuable traditions on to the next generation.

Many thanks to Phuket Tian Sue Tua for the equipment and locations for the photo shooting.