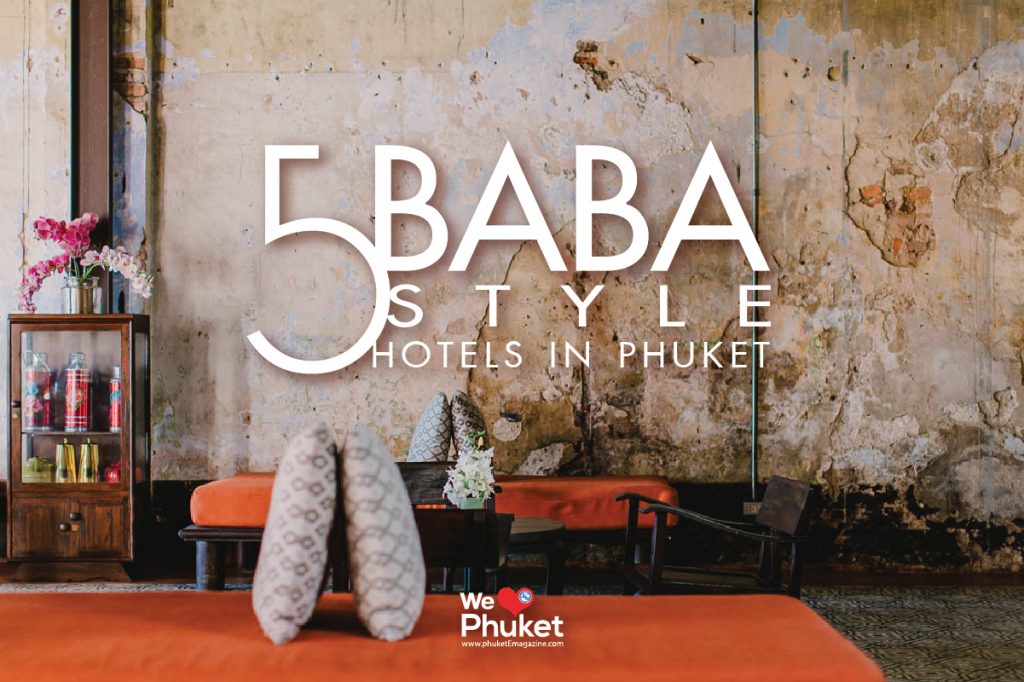 Phuket’s culture is very unique, a rich mixture of religions and races. So it comes as no surprise that the island’s architecture is eclectic, with influences from China, Europe, and of course Thailand. It goes without saying that Phuket also has an interesting mixture of dialects and of course food. Phuket E Magazine would like you to experience another side of this rich culture melting pot via the beautiful hotels which we called Baba-Yaya style hotel.

The Memory at On On Hotel

During Phuket’s mining era, many Chinese came to the island for trade and a multitude of reasons. Some came ashore and used Phuket Towns many small alleys to get to the main market then went back to their ships to sleep. The biggest department store owner at that time subsequently came up with a practical idea: Why not build a hotel for these traders?  The result was the first registered hotel on the island under the name of the An An hotel – later to be rechristened the On On. 88 years later the current name of the hotel is ‘The Memory at On On Hotel’. This boutique hotel has been carefully renovated – the walls, roof, wooden stairways, the cupboards, and all the antique furniture in the hotel has been done over. There are 35 rooms divided into three styles: A ‘Botan flower’ theme is featured on the first floor and is decorated in a red theme. The next floor has a ‘Merchant’ theme, luxurious yet cozy in style, featuring dark wooden furniture. The last type enjoys a ‘Craftsman’ theme, featuring different jobs ranging from a painter, carpenter, tailor and photographer, with each room displaying the equipment pertaining to each particular job. The overall effect is that of a small museum. Moreover, if you’ve ever seen the ‘The Beach’ performed by Leonardo Dicaprio, this is the hotel that features in the opening scenes. This is the best history hotel in Phuket. 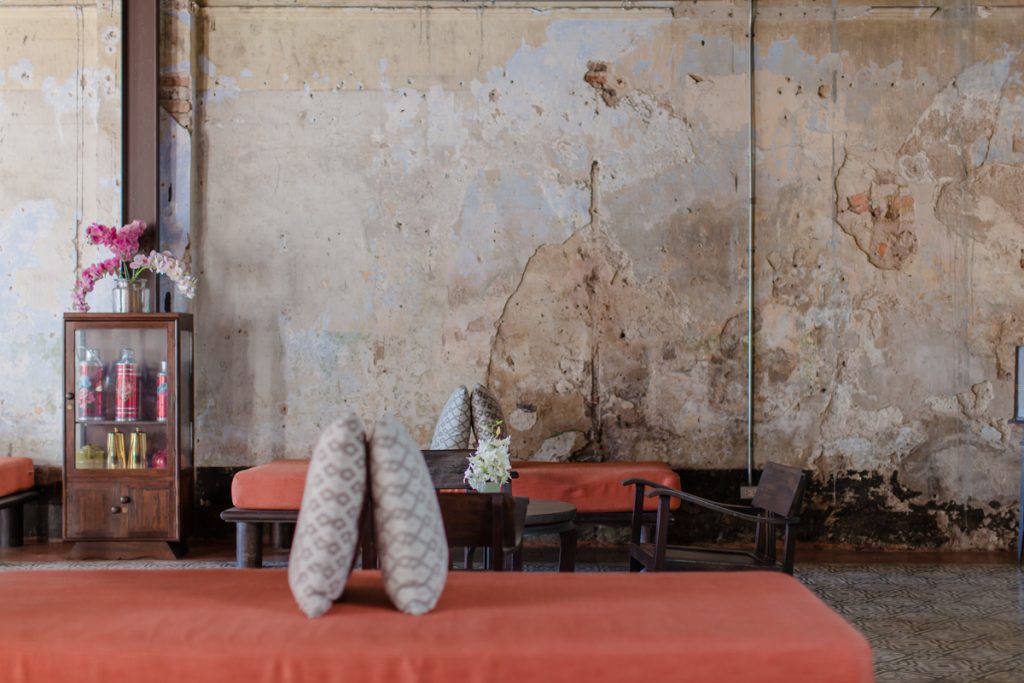 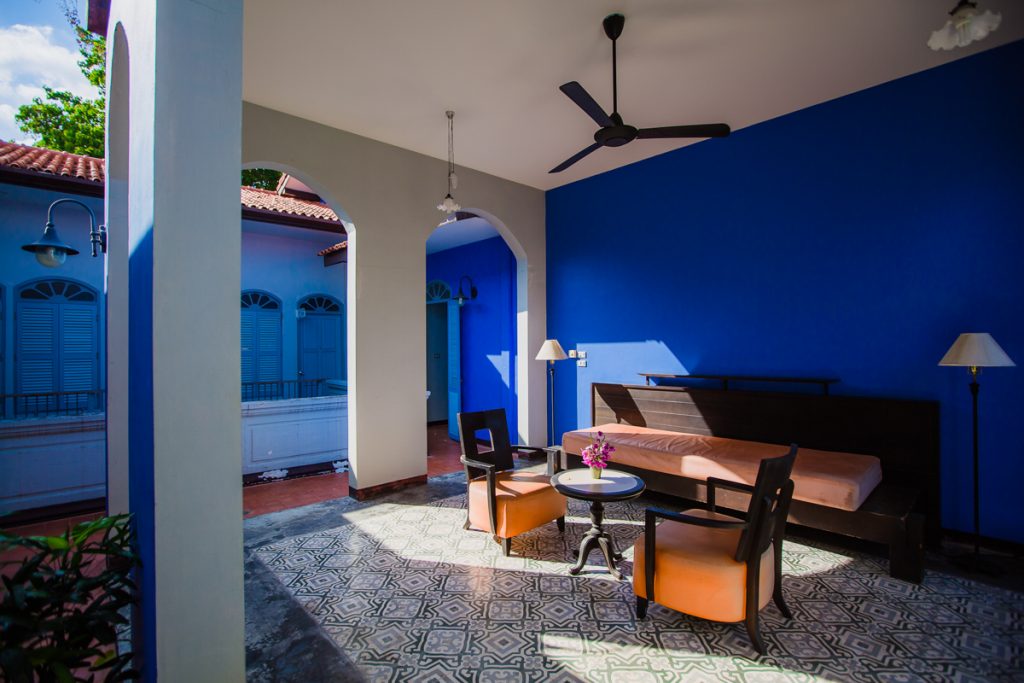 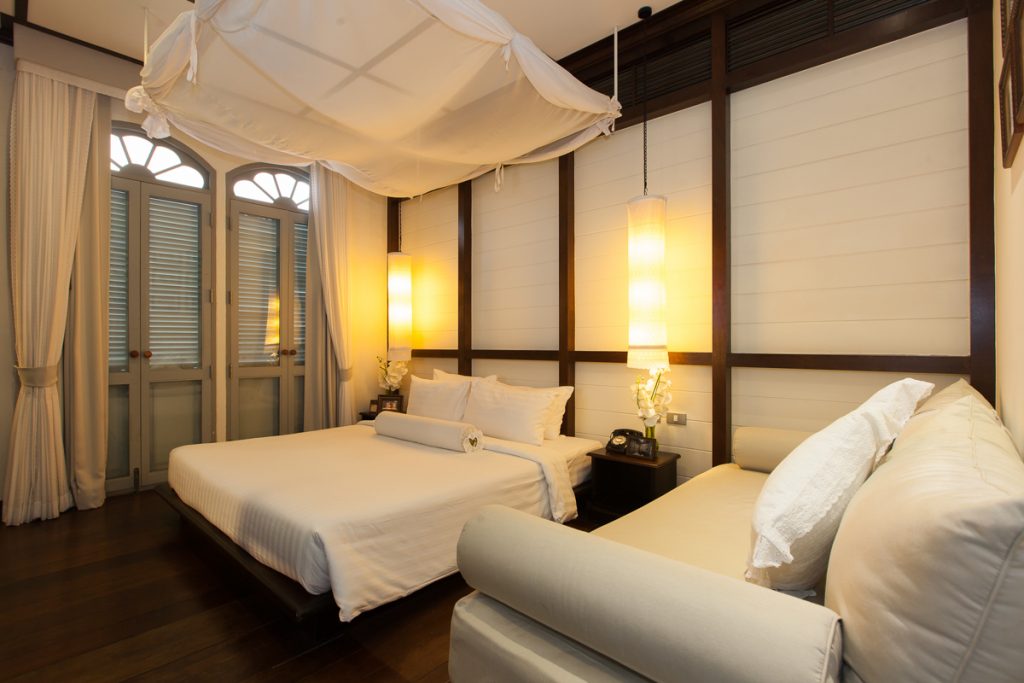 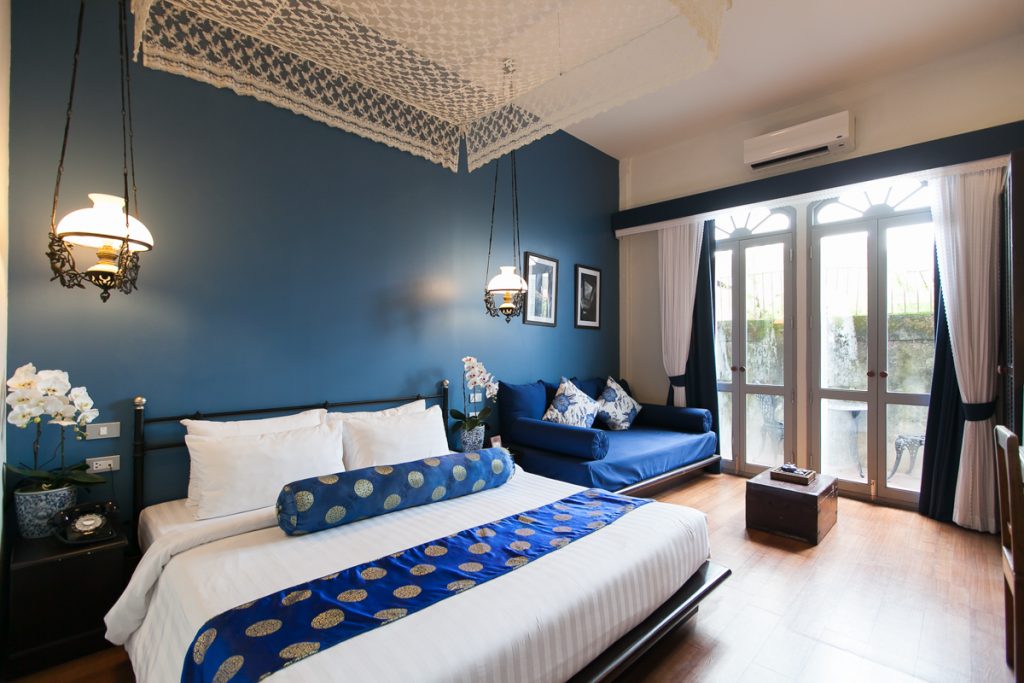 Mixed race girls (Chinese and local) are called Nyonya which is pretty representative of the current situation in Phuket. This was the inspiration for the name of this medium sized, white hotel ‘Little Nyonya’. The architecture and design of the hotel leans towards an ‘east meets west’ theme and it’s a great example of old Phuket-style buildings. The elegant blue-and grey interior complements the guest room designs and all the furniture is made by Phuket carpenters. The main building enjoys views over the swimming pool and garden while the hotel also features a restaurant; the ‘Two Granmas’ with local Thai and international dishes. There’s also a cozy library corner. 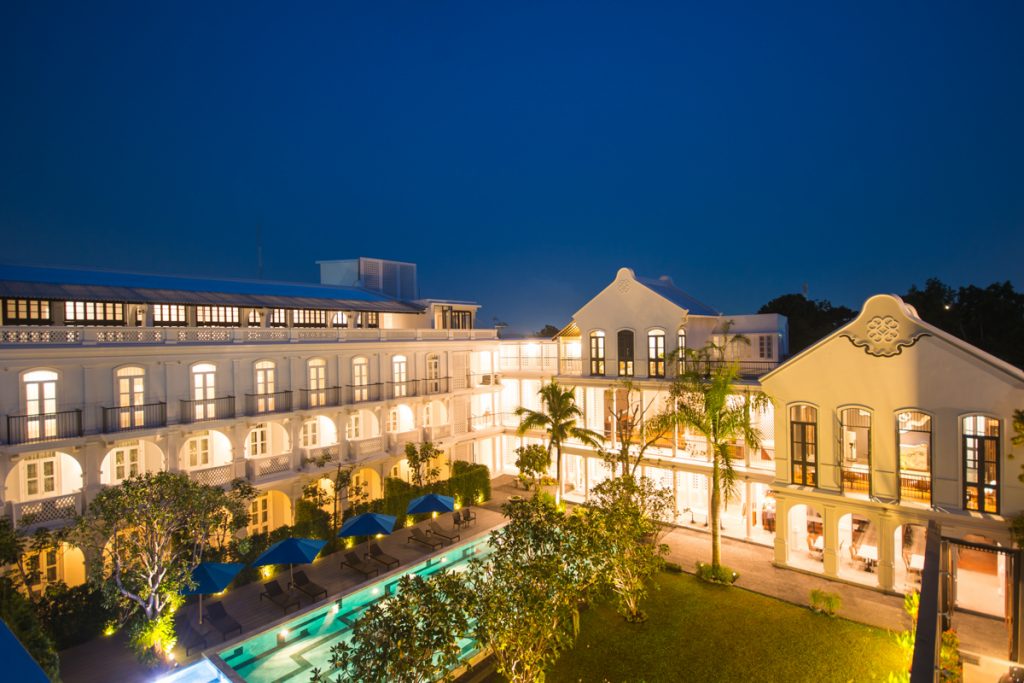 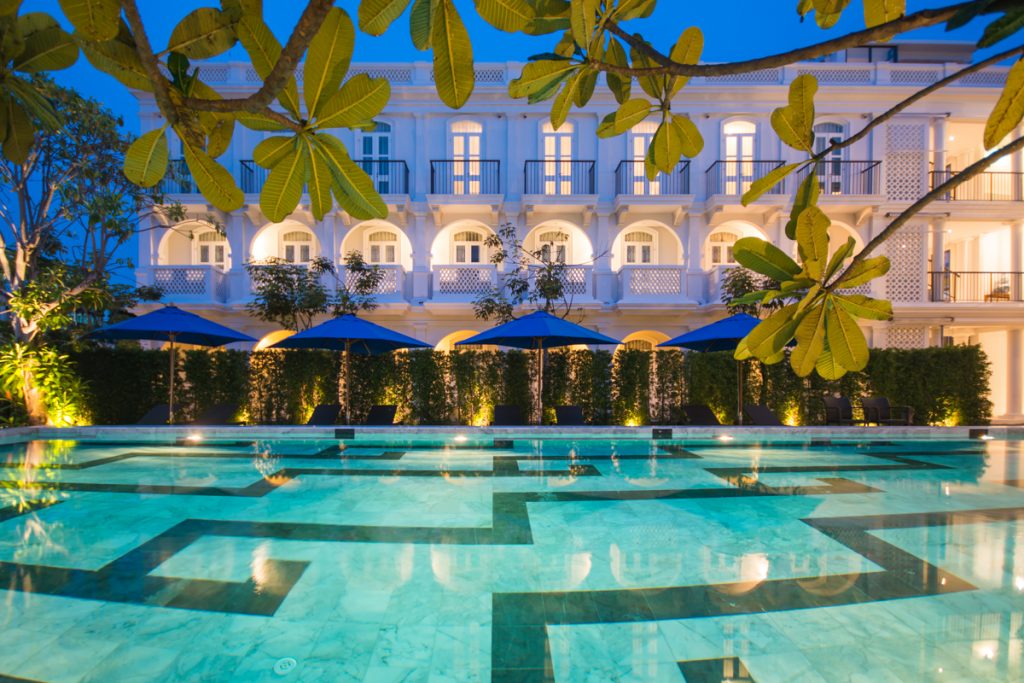 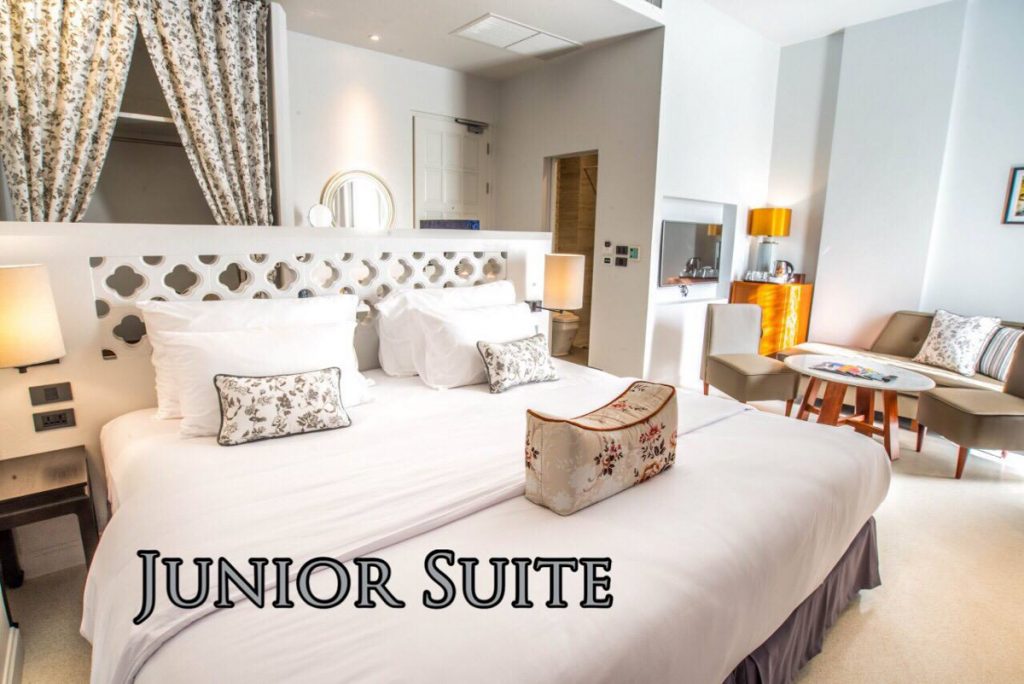 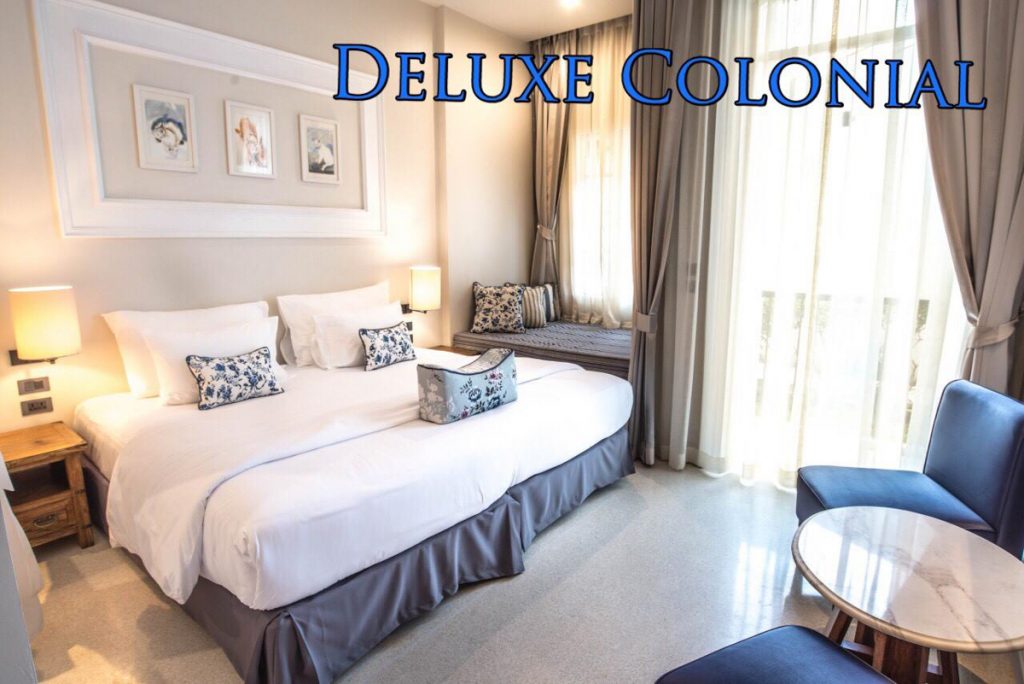 The Proud Phuket is the product of a family run business which understandably takes pride in various aspect of the island – namely love of culture, food, architecture and design and finally nature. These five areas complement the logo of the hotel which is the five-pointed gardenia flower. The orange of the gardenia is the hotel’s main colour theme. The modern design of the hotel juxtaposes the traditional interior concept with a garden and pool in the middle and Phuketian patterns stenciled throughout. Each of the facilities are named in Chinese Hokkien such as the rooftop ‘Lao Teng’, the meeting room ‘Tiem Lai’  and the library ‘Jong Nuan’, the kids’ club named ‘Pong Pang’ and the café – the ‘Ang-Gu teahouse’. This is further reflected in staff members’ uniforms, the transfer bus and local snacks in breakfast buffet. The hotel’s mascot is a turtle made from local batik. The Baba features throughout the hotel. You’ll be proud to stay as a guest in this hotel. 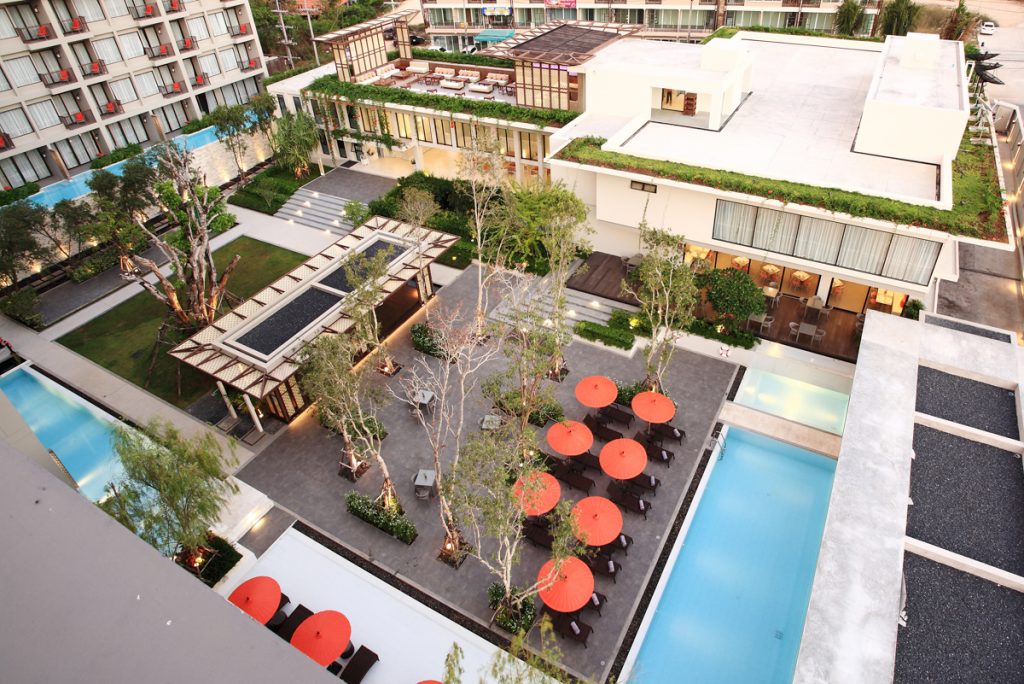 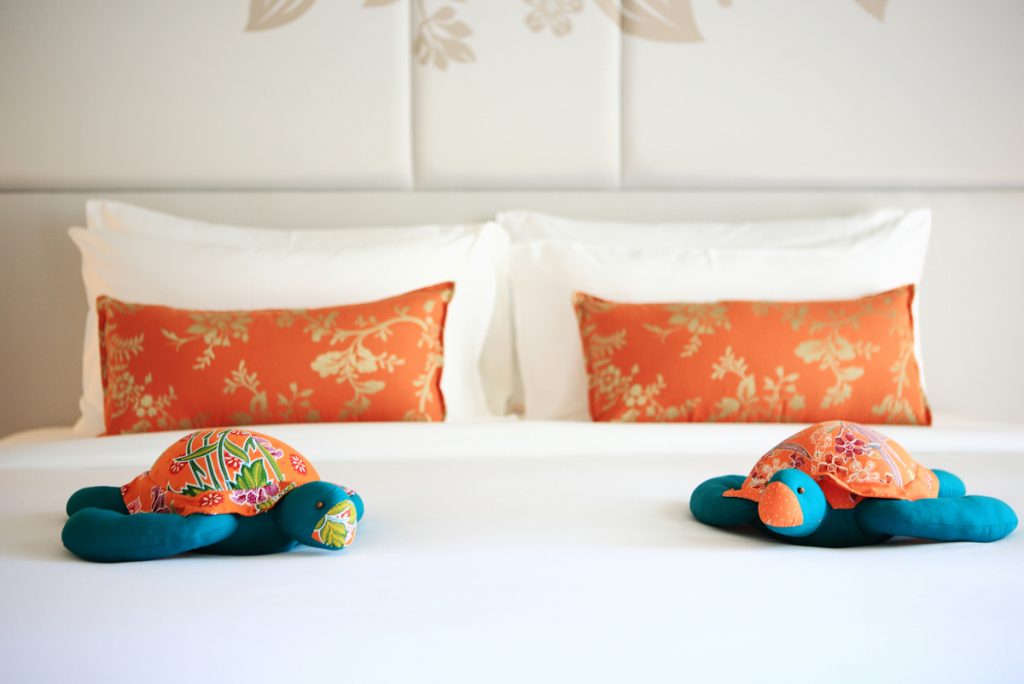 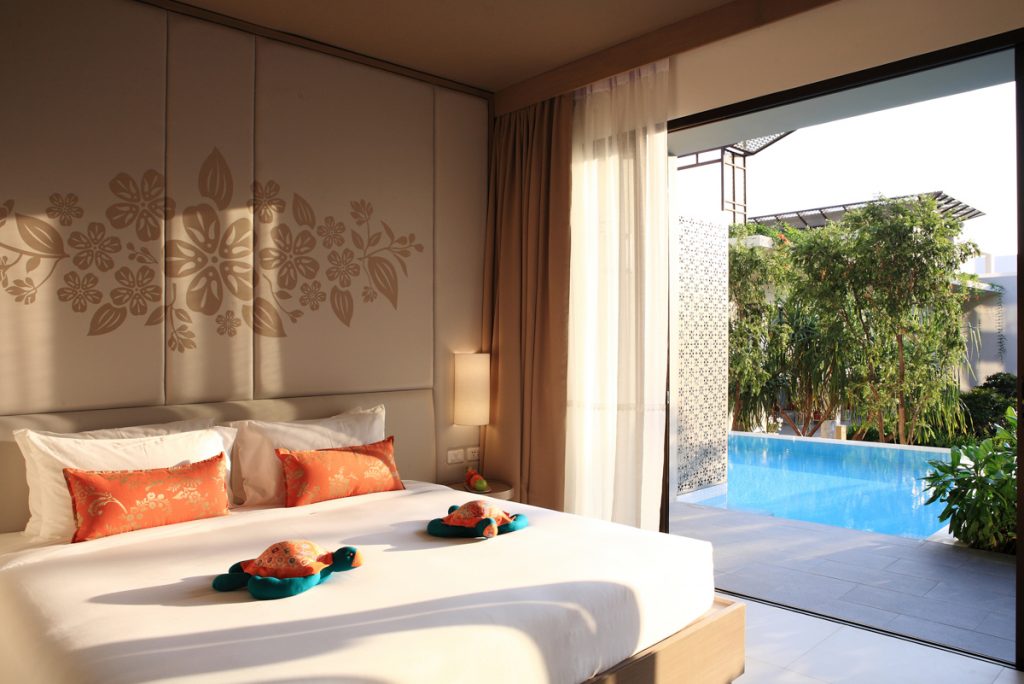 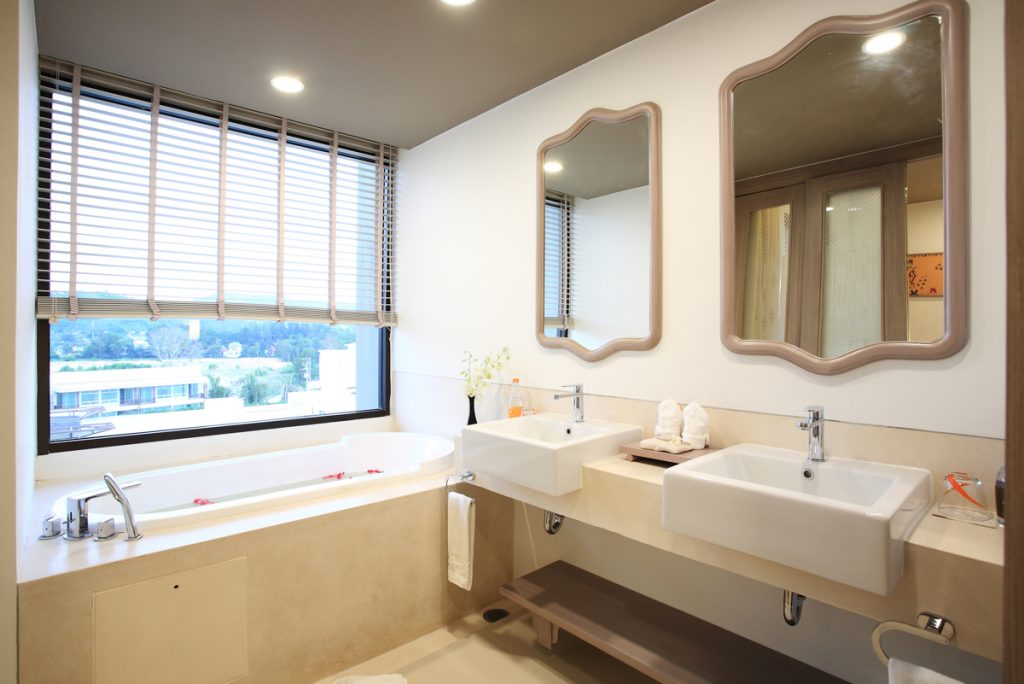 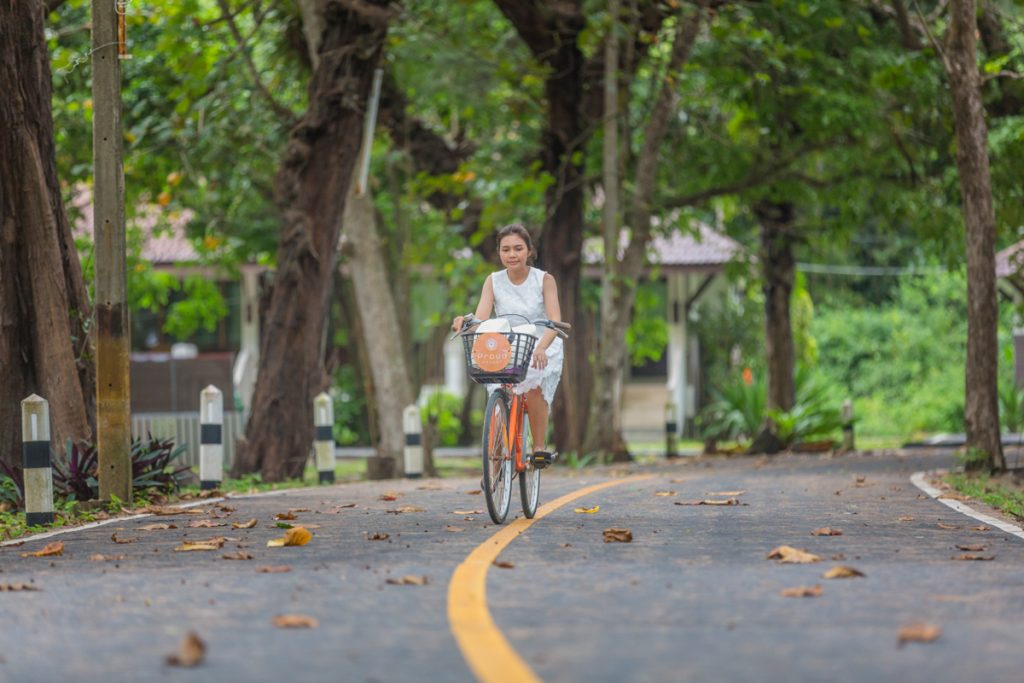 This is a small hotel with a cute name and eye catching colourful design located on the By-pass Road. In the past, its land was used for mining and a rubber tree plantation. Once Phuket became a tourism destination the owner of the hotel wanted to pass the Baba-style concept on to guests so many furniture details from beds, chairs, terraces, ceramic floors, sinks, bedsheets, tea sets and even the paintings on the wall represent the Baba style. It’s simple and yet effective.
https://www.facebook.com/OnyaHousePhuket/ 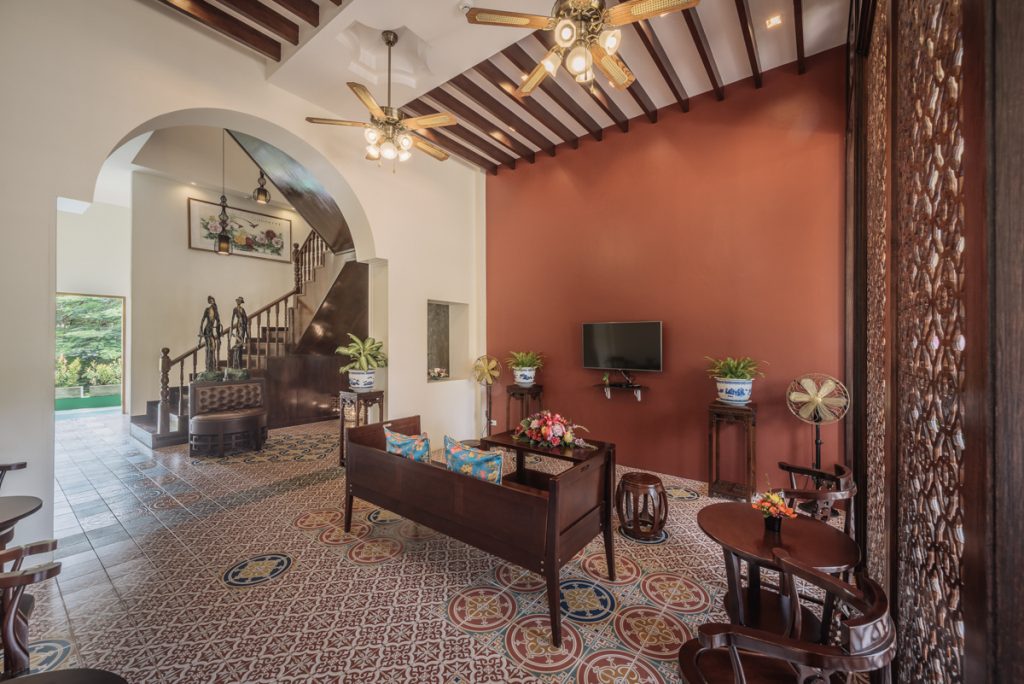 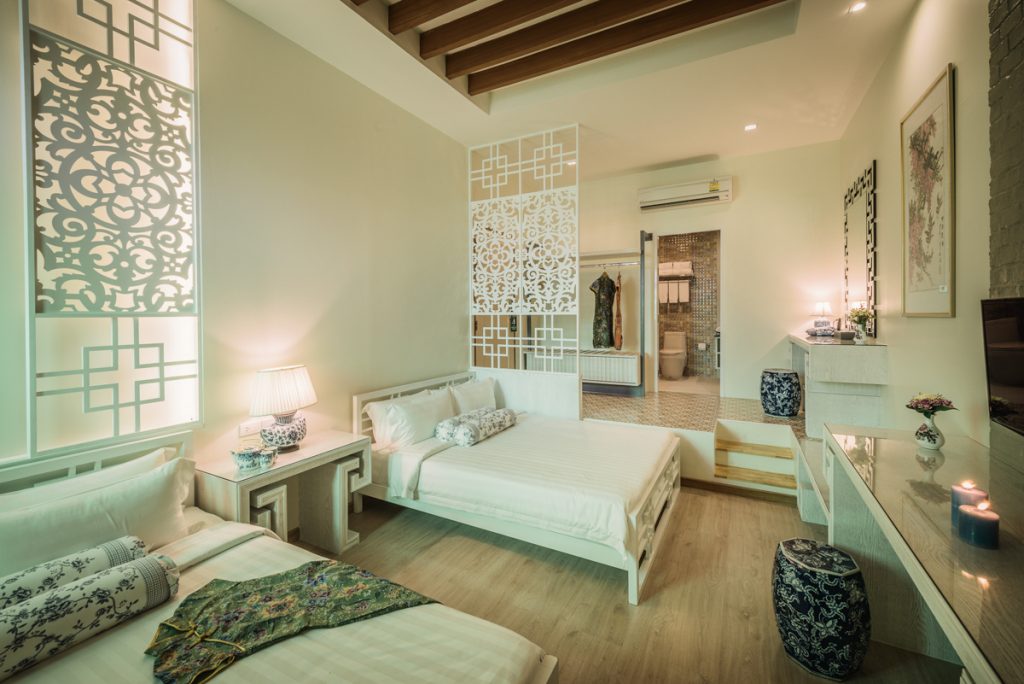 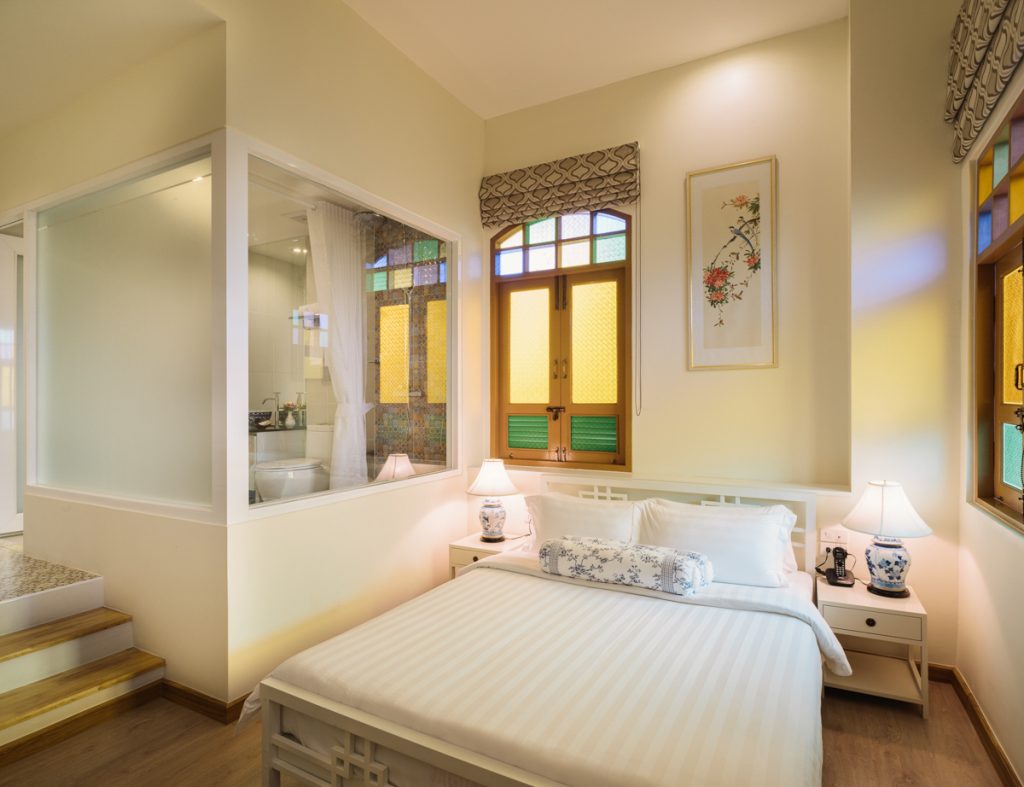 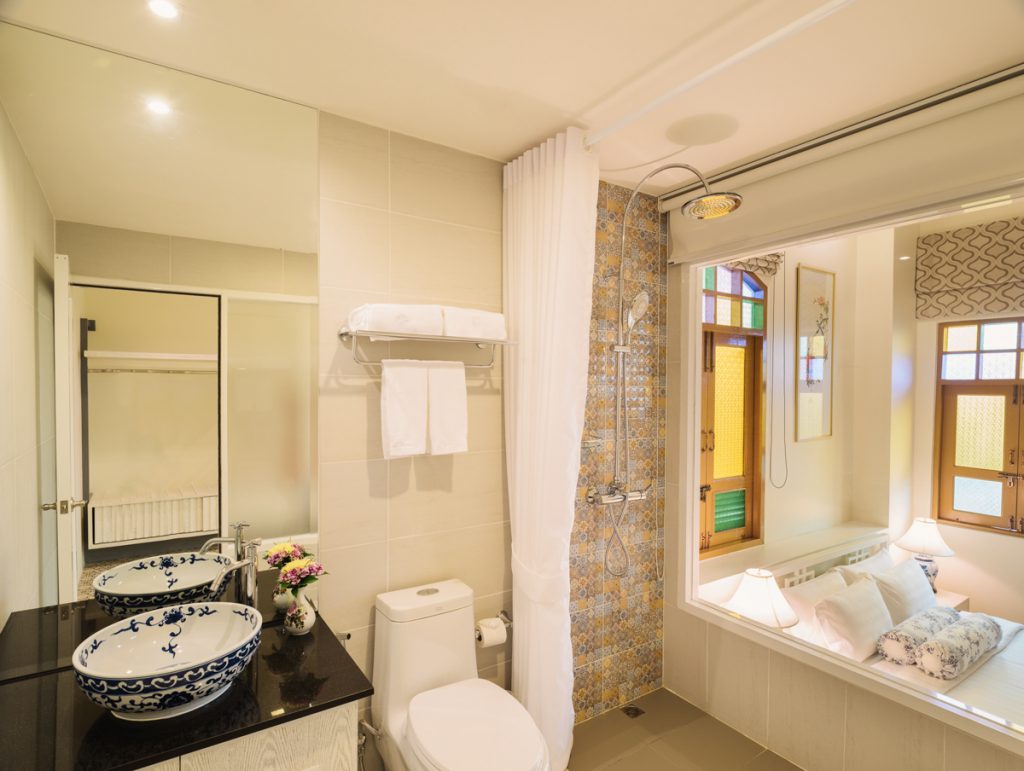 A new, small hotel located on Dibuk Road just opened in 2017. The previous building (a school) was demolished and the new building was inspired by the old name of Phuket Road – ‘Xinlor’ which also means ‘new road’. Its interior features a Sino-Industrial style that reflects the owner’s family business in the past. The design features handmade vases, frames and lamps with a dark blue and white colour theme. There are a total of 17 well-equipped rooms. Some rooms have bathtubs and garden balconies – very suitable for honeymooners and lovers. The first floor has an art gallery and is free of charge.
https://www.facebook.com/XinlorHouse/ 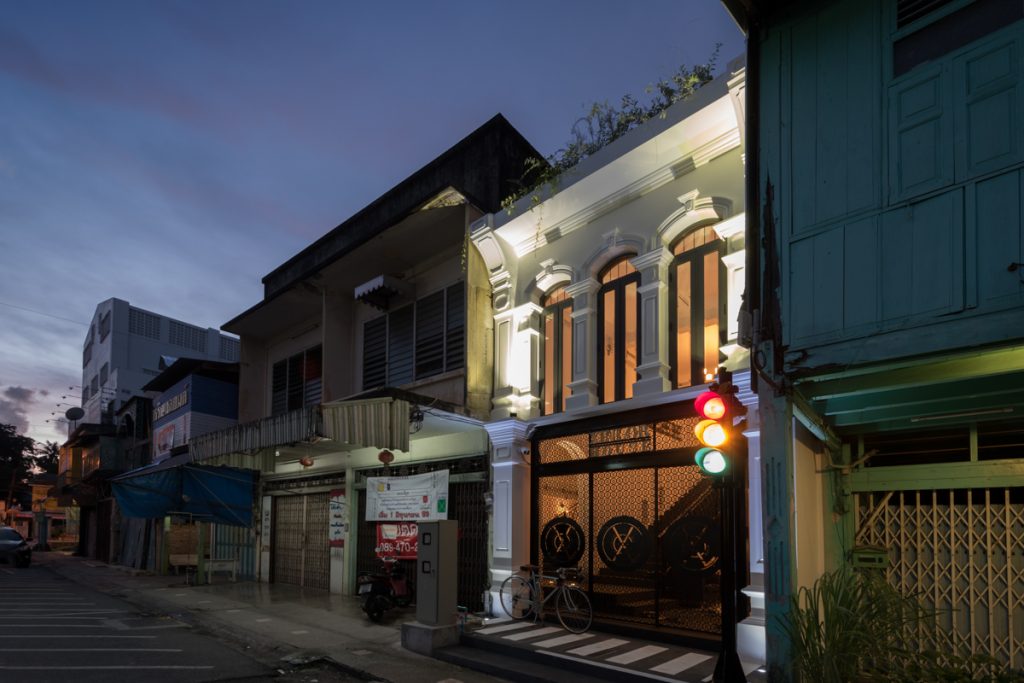 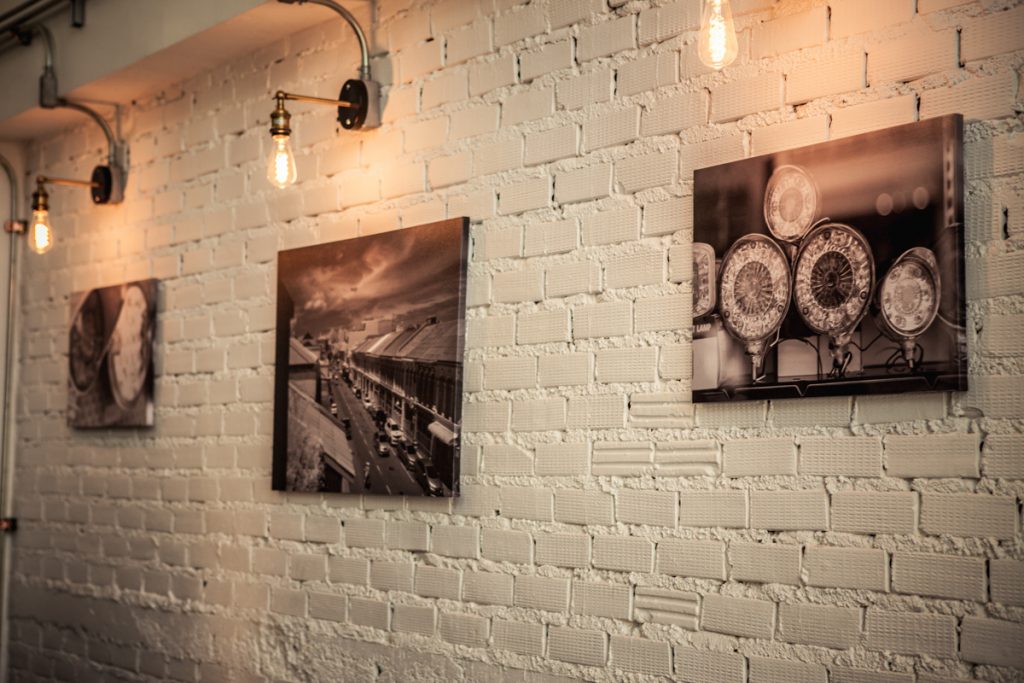 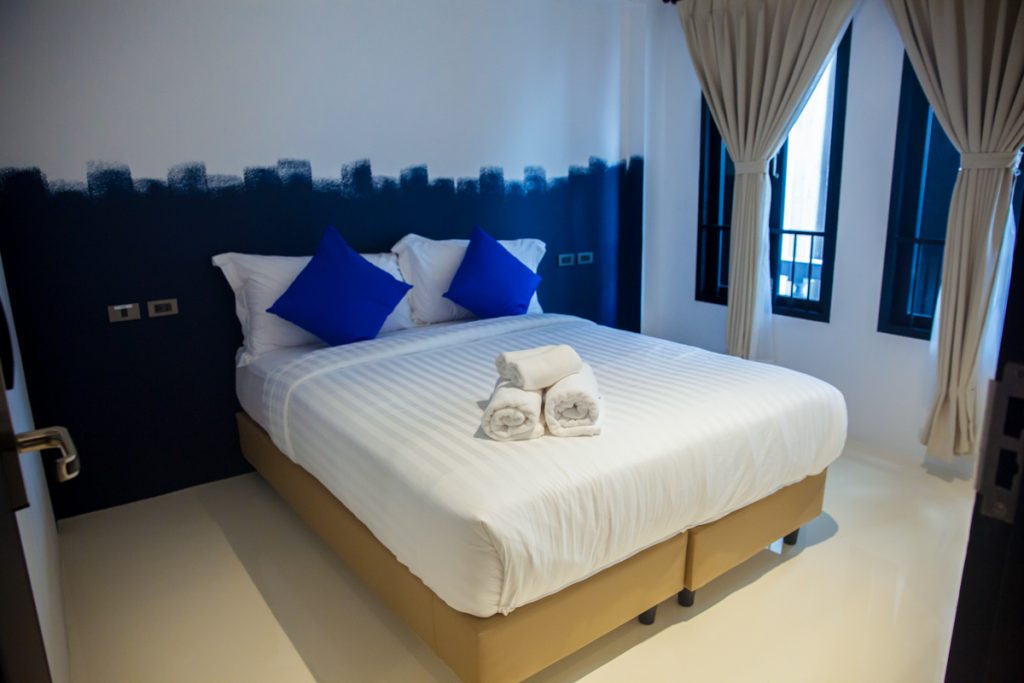 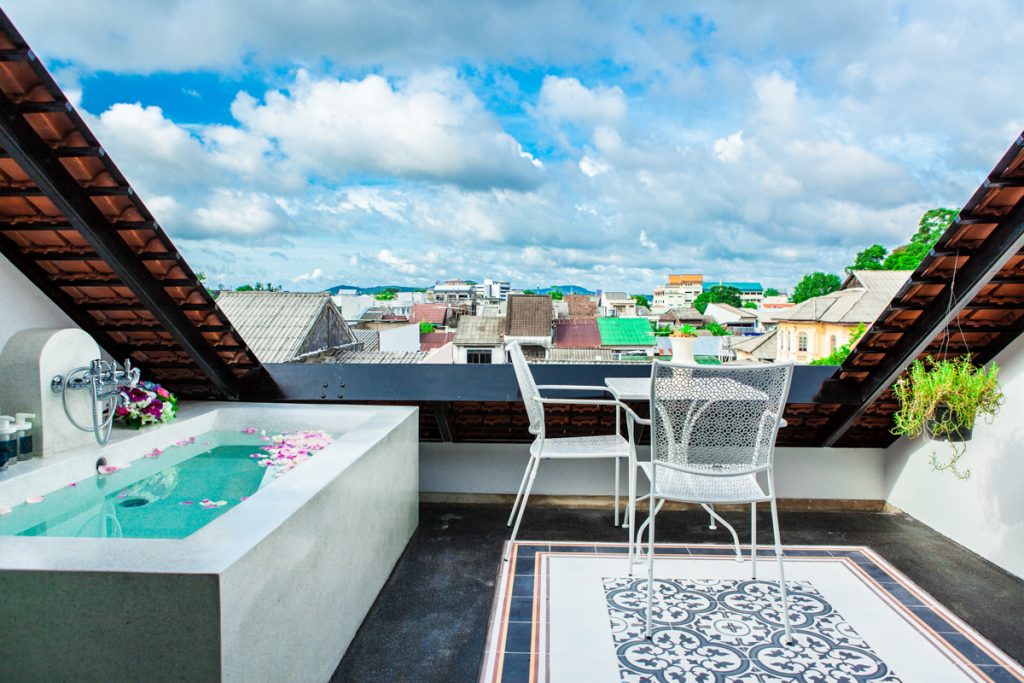 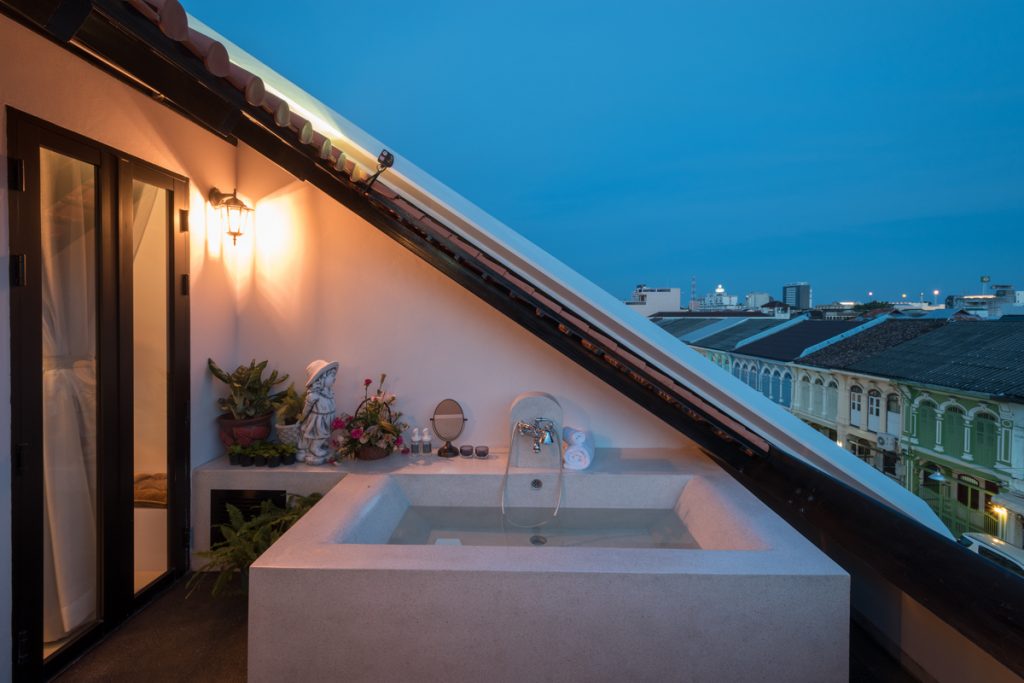